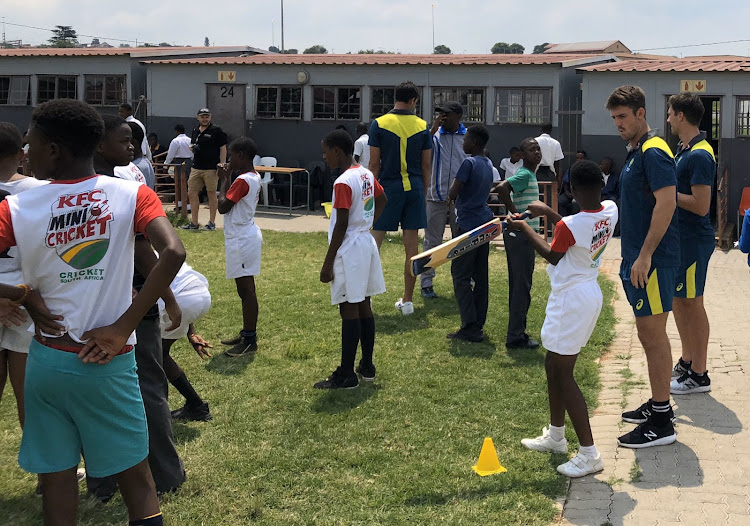 Far from the fidgety and on the move mess he is at the crease‚ Steve Smith was the picture of calm when reminded of his fall from grace two summers ago.

On Wednesday there was no swaying‚ ducking or diving.

Smith got into line and he’s relishing the opportunity to do so.

“It’s nice being back playing here in SA‚" he said.

Smith is back for Australia’s white ball engagements with SA over the coming weeks.

Naturally‚ he will be reminded of the Sandpapergate Scandal that erupted at Newlands two years ago.

In the wake of it he‚ David Warner and Cameron Bancroft were heavily sanctioned for their attempts to furtively alter the condition of the ball.

Being banned for a year was one thing‚ but being shunned by the cricket community at large must have stung more.

Now back at the place where much of the interrogation and investigation took place is like picking at the seam of those wounds.

“Only walking into the hotel at the Sandton (Sun)‚” said Smith with an awkward grin.

“Just initially I was like ‘the last time I left here it wasn’t pretty’. It wasn’t the best time in my life. I moved on from that. I learned a lot over the last two years. I’m moving forward.”

From Smith’s initial experiences since arriving in the country last Friday‚ South Africans have moved forward too.

“People have taken photos and they’ve been nice. Pretty normal.

“We went to the Pumla School (for the severely mentally handicapped in Orlando West‚ in Soweto) and it was an eye-opening experience.

"It was great to see some kids dancing around and smiles on young kids’ faces. It was a terrific day.”

Smith’s perspective may be altered slightly when he and Warner walk out with the setting sun behind them at the Wanderers on Friday.

The Bullring has nooks and crannies where things go bump in the night.

Smith says whatever is said won’t affect him.

“It has been hostile at the best of times here‚” he said about South Africa’s most intimidating cricket ground.

“It doesn’t bother me too much. We had a dress rehearsal in England. There was a fair bit going on.

"I honestly don’t notice it‚ particularly when I’m batting. I block it out. Maybe a little bit when I’m fielding‚ then again it is just words.

"It doesn’t affect me. It’s about getting on with the business and doing the job.”

He won’t hide in the field.

“I think I will be doing some out fielding. I’m looking forward to it. I’ll smile and laugh‚ play along and have some fun.”

Mostly though‚ he’s looking forward to batting in an environment tailored for it.

“You don’t have to over hit the ball. The ball flies here. You hit the middle of the bat it generally goes a long way.

"I remember playing here in the Champions League final here and talking to Michael Lumb. I said ‘what do you do here at the Wanderers?’ He said‚ “just get it in the atmosphere’.”

If he can block out the crowd the way he says he can‚ expect Smith to soar too.

The talking will continue‚ and no doubt too the speculation.
Sport
2 years ago

Mark Boucher has admitted that his first taste of international coaching was tough after the Proteas lost the Test and T20 series to England in the ...
Sport
2 years ago
Next Article