SA continue to test England's patience on the fifth afternoon 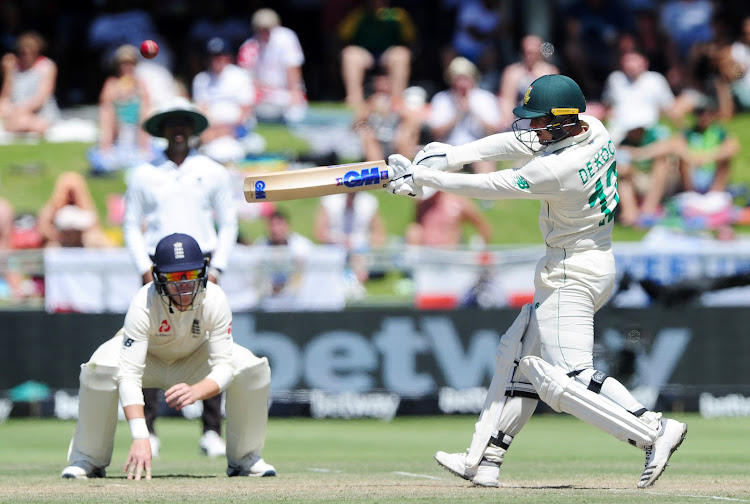 While a critical wicket was lost on the fifth afternoon‚ SA still remained firm on 225/5 at tea.

Quinton de Kock (38 off 91) was enterprising and vigilant while Rassie van der Dussen (17 off 105) battened down the hatches with a unbeaten 54-run‚ sixth-wicket stand that spanned 169 deliveries.

Their partnership was one of four that spanned more than 100 deliveries as South Africa tested England's patience.

The innings has already spanned 115 overs and 31 more remain for the fifth and final evening.

The time/runs equation is firmly out of the window now with the overs/wickets equation being the significant one.

England need five wickets and South Africa have to bat out 31 overs.

Cheers around Newlands as De Kock notches a 1⃣9⃣th half-ton (The slowest of his career ! )

England‚ though‚ claimed a key scalp in Pieter Malan (84) in a session that also produced 55 runs from 192 balls.

While there were spells from Joe Denly (1/42)‚ Dom Bess (1/47) and Joe Root (0/11) that troubled the batsmen slightly‚ it was pace that claimed the critical wicket of Malan 20 minutes after lunch.

Tom Curran (1/25) was given the new ball just before lunch and while it didn't do much from a swing perspective‚ the harder ball bounced more‚ asking questions of Malan's then impeccable footwork.

The nut that got rid of Malan seemed to jump at him from a length he'd generally be comfortable defending off the back foot and the edge flew comfortably to Ben Stokes at second slip.

It was the only false shot in Malan's 369-minute‚ 288-ball vigil that saw him hit only three fours.

South Africa's currency though was batting out time and letting England bake in the hot sun.

That also meant the pitch would cook and finally‚ it started behaving like a fifth-day surface.

We're entering the end game. How will this pan out?

South Africa still needing a further 213 runs to win, with 5 wickets in hand.

With serious rough outside the left-handers off-stump at the Wynberg End and the crack at the Kelvin Grove End‚ there was plenty for the bowlers to work with as the bounce remained remarkably consistent.

After Malan's dismissal‚ De Kock had a number of hairy moment when Denly's leggies jumped at him from the three sets of rough patches on different lengths.

This didn't dim De Kock's positivity though as he punched boundaries and rotated the strike at will.

With runs in the bank‚ England were content to let De Kock flourish from an attacking perspective while tying down Van der Dussen.

To his credit‚ Van der Dussen understood that the need to occupy the crease was far more important than the want to score runs.

It'll be that attitude from him and De Kock's controlled belligerence that'll hold the key to SA's final session survival.