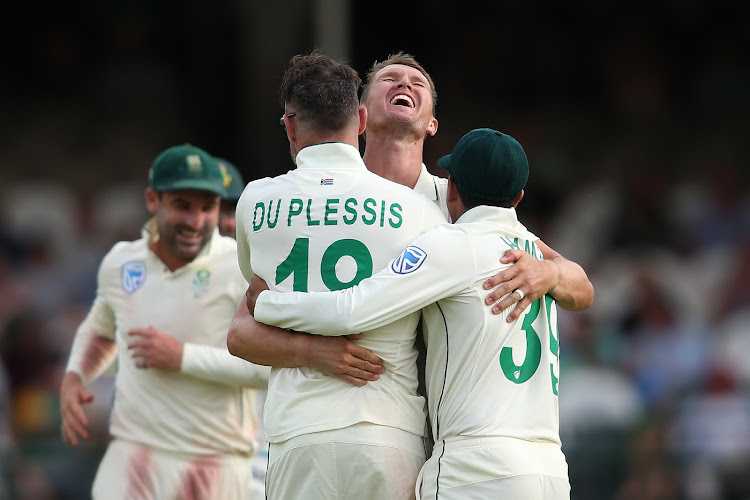 They don't lie when they say day three of a Test is a moving day as England positioned themselves strongly for a fourth-day assault.

Dom Sibley (85*) is the overnight batsmen and with firepower in the form of Ben Stokes and Jos Buttler to come‚ the new ball may fly around Newlands when the visitors decide their slow going is enough.

Their gradual grind was sufficient on a day where they bowled out the hosts for 223‚ leaving themselves a massive chunk of the morning and the rest of the afternoon and evening to set out their stall.

The rhythm and pulse of England's batting was noticeable. They went out hard and fast early before losing Zak Crawley in the 11th over.

Sibley and Joe Denly settled in for a sapping but necessary 73-run second wicket stand that spanned 198 balls.

While South Africa gave nothing away in those sessions‚ they were behind the eight-ball because of the 46-run lead they conceded.

In the first session‚ England only scored 52 for the loss of one wicket in the 19 overs they batted.

Their third afternoon saw them slow down the ante with 57 runs off 28 overs with the loss of one wicket.

They plundered in the final session with 109 runs off 32 overs for the loss of Root's scalp off Dwaine Pretorius (1/34) and Bess off Anrich Nortje (2/36).

It was the basic cricket lesson of investing early‚ then cashing out later.

Crawley and Denly only had themselves to blame for not pressing on.

Such was the process-driven nature of England's batting‚ there were none of the faux-pas that pockmarked their scruffy first-innings effort that at first view looked inadequate.

Their 37-year-old bowling warhorse James Anderson (5/40) made sure it wasn't with a 28th Test five-wicket haul that saw the legs from SA's lower order batting.

After removing Keshav Maharaj with the last ball of day two‚ he did the same with Rabada with the first one on day three.

He missed the hattrick‚ but returned for Nortje to complete a clean-up he normally reserves for better batsmen.

It followed on from England's dream second evening where they reduced SA from 157/3 to 215/8‚ effectively changing the direction of the game.

With Sibley and Denly having blunted the new ball‚ Root glided to a 46th Test 50 off 81 ball while the 100 partnership was raised in 177 balls.

Sibley was far more measured in compiling his maiden Test 50 off 140 balls‚ but he finally showed the crease occupation signs England have been looking for from the raft of opening batsmen they've unsuccessfully trialled since Andrew Strauss's and Alastair Cook's retirements.

It's early to say whether England have found their opening combination‚ but they've driven themselves forward in this game.

England lost wickets at the start and the end of the morning session to go to lunch at 67/2 on Friday’s day one of the second Test against South ...
Sport
2 years ago

South Africa’s record at Newlands is as formidable as the beautiful mountain that broods over the stadium‚ something that should worry England ...
Sport
2 years ago
Next Article