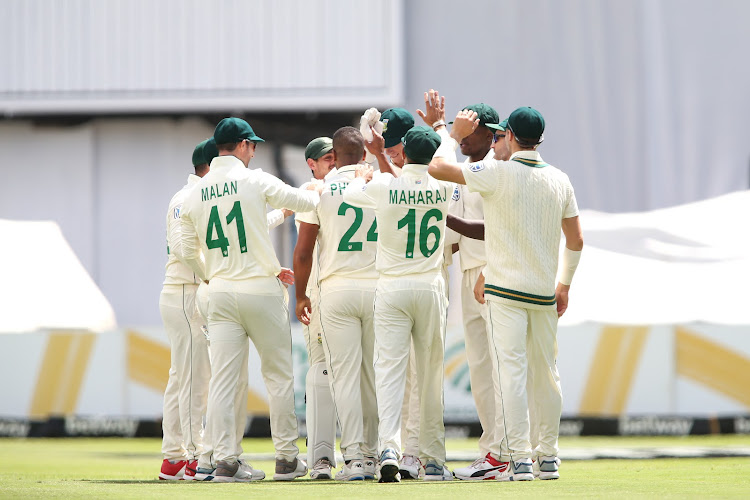 England lost wickets at the start and the end of the morning session to go to lunch at 67/2 on Friday’s day one of the second Test against South Africa at Newlands.

It could have been even better for England after Dom Sibley (36) and Joe Denly (21*) put together an uncompromising and efficient second-wicket stand of 55 runs‚ but Kagiso Rabada (1/30) prised out Sibley 11 minutes before the break to end the resistance.

Earlier in the game‚ Vernon Philander (1/13)‚ who is playing his last Test at Newlands‚ removed Zak Crawley (4) in his second over to leave England in slight trouble at 8/1.

Both batsmen were caught behind‚ with Quinton de Kock taking very good catches that also slightly betrayed his lack of trust in Rassie van der Dussen at first slip.

Denly and Sibley‚ while being beaten by some good balls from Philander from the Wynberg End‚ diligently stuck to their task and saw off the testing early spell.

Sibley’s untimely dismissal meant England captain Joe Root (4*)‚ who won the toss and was unambiguous in making first use of a straw-coloured but decent-looking pitch with patches of green grass‚ was subjected to a short and intense pre-lunch examination from Rabada.

He had the skill and the fortitude to ride out that small storm‚ but it wasn’t in England’s best interests to have lost a wicket just before the break.

However‚ that means England have their best batsman in with some of the shine knocked off the new ball.

Also‚ it stands as a reasonable start for a green England top order.

Going into the Test‚ Crawley‚ Sibley and Denly only had 15 matches between them.

That’s the same number of Tests their most experienced opener Rory Burns has.

Burns has been ruled out of the series after injuring his ankle on Thursday afternoon while playing football during England’s pre-warm up session.

Such was the effect of the injury‚ England’s director of cricket Ashley Giles moved to have football banned from England’s warm-up routine.

It’s claimed a few victims in the past‚ with Jonny Bairstow‚ who is dropped for this game‚ also being injured because of a pre-practice session football game.

England also went into the game without Jofra Archer‚ who’s elbow injury didn’t recover in time for the game.

Spinner Dom Bess replaced him and with Keshav Maharaj beating Denly with a beauty of a delivery on the stroke of lunch‚ Archer’s absence may not be such a big issue.

However‚ 14 sessions of this game still remain.