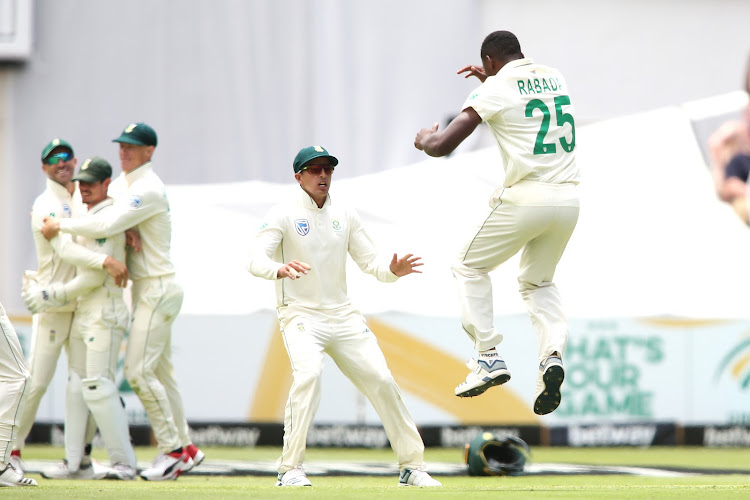 The honours were again shared in the afternoon session of the second Test at Newlands where England took tea at 149/4.

Honours were shared in the sense that England more than doubled their score from their lunchtime position of 67/2‚ but lost two well-set batsmen in the Joes‚ Denly and Root.

The loss of Denly (38) was something England could ill afford as the stodgy yet determined No 3 had bedded in well in this 189-minute knock that spanned 130 balls.

He’d seen off the threats of Vernon Philander‚ Kagiso Rabada and Anrich Nortje (1/34)‚ but looked suitably unsettled by Keshav Maharaj (1/36).

The left-arm spinner had beaten Denly with one that turned viciously on the stroke of lunch and that seemed to play on Denly’s mind.

While the Newlands surface is expected to turn later in the game‚ it wasn’t the kind Denly could have anticipated on the first morning.

He was beaten by one that went straight on with the arm‚ something that made SA’s spin consultant Paul Harris smile.

Harris was far from the king of spin in his day‚ but he certainly was the sheik of the straighter one.

Having survived Kagiso Rabada’s (1/47) intense pre-lunch burst‚ Root (35) batted with a sense of purpose of knowing he needs to make the best of what could be the best batting conditions of the game.

His 49-ball knock was a busy one‚ but it also included a life on 31 where Rassie van der Dussen shelled a tough but catchable chance at first slip.

Again‚ wicketkeeper Quinton de Kock dived in front of him in what is becoming a serious lack of trust that’s not only affecting the quality of slip catching‚ but could lead to a critical catch being grassed.

The mistake wasn’t punished as Root was bounced out two balls later by Nortje‚ with De Kock taking a simpler catch.

However‚ the question mark in regards with the slip fielding remains.

The wisdom of having a player with two Tests fielding at first slip has to be questioned as that’s often reserved for the captain or one of the senior catchers in the team.

That could be informing De Kock’s need to dive for edges that on most days‚ should be left to first slip.

With the game entering a critical phase with Ben Stokes (28*) looking increasingly comfortable and belligerent‚ catches can ill afford to be dropped.

If Stokes and Ollie Pope (5*) can be prised out‚ the door to England’s flaky tail can be kicked down.