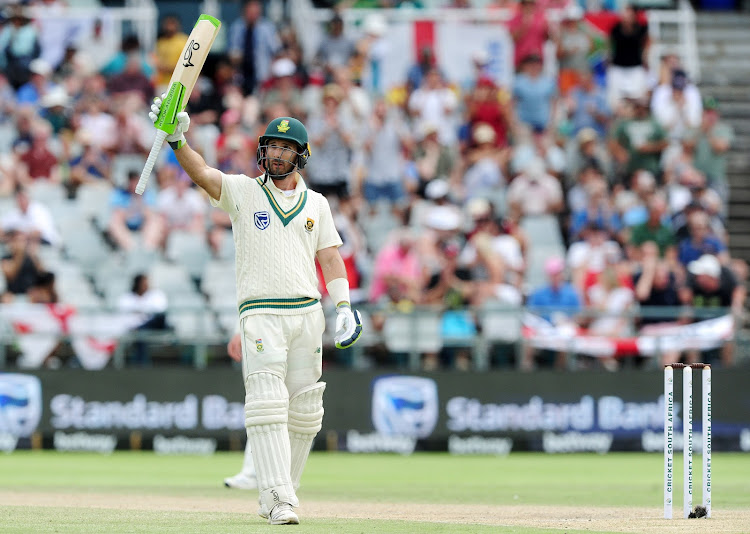 Pieter Malan raises his bat to celebrate his half century on debut at his Newlands home ground.
Image: Ryan Wilkisky/BackpagePix

With SA 126/2 after 56 overs with Pieter Malan (63*) and Keshav Maharaj (2*) to restart proceedings on Tuesday morning‚ battening the hatches now stands as the most feasible option.

The 312 runs needed in 90 overs is as far as Cape Town is to Johannesburg for the hosts.

Targets of 400 or more have only been chased down four times since 1877.

There have been 20 fourth-innings totals of 400 and above‚ but no team has matched or bettered the West Indies' 418/7 against Australia in Antigua in 2003.

South Africa own the second highest successful Test chase‚ pulled off against Australia in Perth in 2008‚ but it's a different year‚ different pressures and a markedly different pitch.

Having misbehaved for the first two days‚ the Newlands surface settled down.

Not into a batting beauty‚ but without the inconsistent bounce and erratic movement threats that dogged the batsmen early on.

The pitch was sound to allow England to tally up 391/8 declared 20 minutes after lunch after Dominic Sibley (133*) carried the visitors on his tall frame and broad shoulders for his first Test 100.

While he provided the spine with Joe Root (61) bringing the flesh‚ the muscle came from Ben Stokes.

His red-hair has a hi-octane nature to it and so did his fourth morning batting that accelerated England's declaration.

He received half a life on 38 when Quinton de Kock couldn't quite get to a top-edged hook coaxed by Kagiso Rabada (2/69).

The rest though was an exhibition of clean hitting and furious running between the wickets.

There was a visible sagging of the shoulders when he took on the bowlers.

The spirits visibly lifted when he picked out Rassie van der Dussen at deep long on off Maharaj (2/160)‚ but the lead by then had long gone past the ground's highest successful chase pulled off by Australia against South Africa in 2002 when they made 334.

Ollie Pope (three) didn't have the same first innings impact when he chopped on a Rabada delivery while Jos Buttler (23) sparkled momentarily before he fell to Anrich Nortje (3/61).

Sam Curran (13) didn't stay long enough to bother the bowlers‚ but it was Sibley's morning.

A first Test hundred will forever remain a red-letter day for any batsman‚ but it was a classic get-stuck-in innings from the bedrock of England's innings.

Without this innings‚ England's target would have still been a stiff‚ but gettable one.

England will have a lot to owe him should they win this Test.

The wait between James Anderson's 27th and 28th Test five-wicket haul was only six matches.
Sport
1 year ago

Proteas team director Mark Boucher has been on the receiving end and part of record fourth innings run chases over the years.
Sport
1 year ago
Next Article