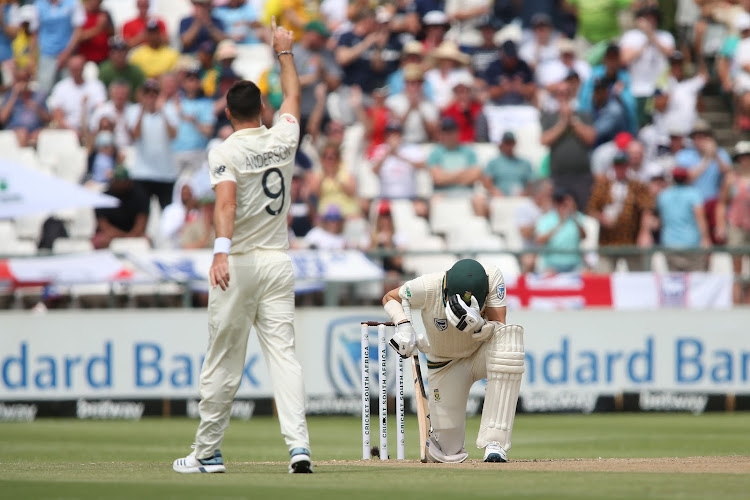 In the 2010 New Year's Test between SA and England‚ James Anderson took a five-wicket haul.

A decade later and on the very same occasion‚ Anderson took another one as England forged ahead against SA on a cloudy third morning in Cape Town.

With England dismissing SA for 223 20 minutes after play resumed‚ they pressed on to 52/1 with Dom Sibley (18*) and Joe Denly (9*) looking comfortable at the crease.

England's lead stands at a threatening 98‚ even though the pitch didn't display its customary new ball venom.

They did lose the belligerent Zak Crawley (25)‚ who was keen to get on with the game‚ but the fact they've only lost one wicket means they've got a decent opportunity to put together a serious‚ if not a potentially series-tying lead.

Anderson‚ who at the end of day two dismissed Keshav Maharaj with what became the last ball of the day‚ got rid of Kagiso Rabada first ball to be on a hat-trick.

However‚ his radar malfunctioned for the hat-trick ball to Anrich Nortje.

England's record wicket-taker didn't have to wait too long for his 28th five-wicket haul when Nortje was caught by Ben Stokes at second slip.

It was also Stokes's fifth catch of the innings‚ making him the first England player and 12th overall to take five outfield catches in an innings.

While Sibley was content to keep an end safe‚ Crawley drilled two fours in the first over of the second innings.

His counter-attack that contained five fours had the potential of derailing the hosts but Rabada (1/25) had him marching back to the sheds when he coaxed an edge that was well caught by Quinton de Kock.

Perhaps‚ Crawley's urgency was based on the realisation that with the difficult nature of the surface‚ getting runs quickly before getting out is a feasible option.

However‚ there's still time left in the game to let the surface deteriorate.

The sun that baked the pitch on days one and two wasn't there but England will know they're in the pound seat with two sessions remaining in the game.