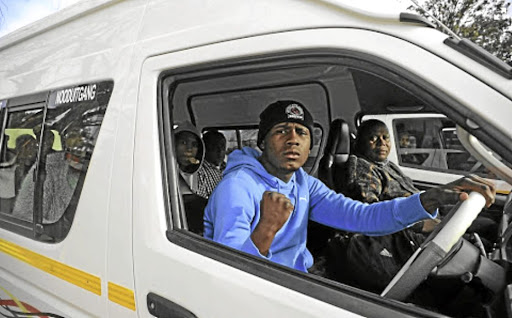 Ronald Malindi was a taxi driver before he became a boxer and says he won't quit his full-time job.
Image: THULANI MBELE

The national lockdown to curb the spread of the Covid-19 has effectively dropped reigning South African bantamweight boxing champion Ronald "King" Malindi for a mandatory count.

His full-time job as a taxi driver has been affected by the lockdown that has brought his taxi to a grinding halt.

But the tough-as-teak lanky fighter says he is optimistic life will get back to normal and then hit the road again.

The 25-year-old stand-up boxer from Venda, whose boxing career is guided in Westbury by trainer Bernie Pailman, says he has been in the taxi industry for eight years.

He operates out of the Helen Joseph Hospital taxi rank which is close to Pailman's Westside Boxing Academy.

Malindi is not ready to quit his job which has kept him going even before he became a South African boxing champion. Instead, Malindi intends to purchase his own mini bus in the near future and be his own boss.

"This job has helped me in trying times while still waiting for a fight," said Malindi.

"You don't need any CV to drive a taxi; you need a valid driver's licence, permit and the right attitude to work with people."

He may be gone but his spirit will live forever. That is how Zolani "Last Born" Tete and Moruti "Baby Face" Mthalane, the country's top professional ...
Sport
11 months ago

The former top amateur says he is fortunate to have signed a contract with Rumble Africa Promotions of Thembalethu Ntuthu because CEO Nomfesane Nyatela cares for their fighters.

"She is like a mother to me," he said, adding that it was Nyatela who advised him to park his taxi and stay at home during this lockdown.

"When things go tough financially, I call her and she always helps.

"I have never been looked after in such a way since I turned professional in 2013.

"I have a three-year-old daughter Paige and I am able to take good care of her."

Malindi says he is keeping in shape it by doing exercises at home during the lockdown.

"But it is not easy; we are used to the gym where there is space and punching bags."