PSL free to rule on cup 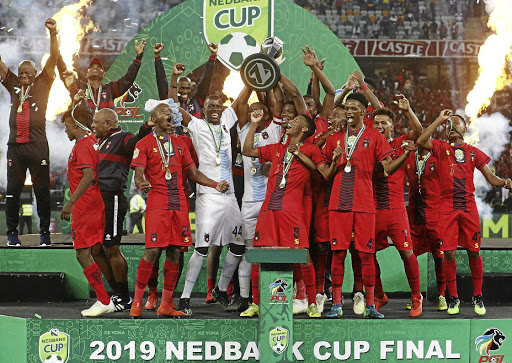 With the Nedbank Cup the only Premier Soccer League cup competition yet to be concluded this season, the head sponsors of the tournament are not putting the league under any pressure to play the remaining games.

Sport sponsors around the world are re-evaluating their endorsements amid the global health crisis wrought by the coronavirus. With games having come to a halt, sponsors are not getting the exposure for their brands. Financial services group Nedbank, however, has not made demands about completing the tournament.

In a short statement to Sowetan, the bank said: "The Premier Soccer League and its board of governors have suspended all PSL fixtures in line with the pronouncement by President Ramaphosa to curb the impact of Covid-19. Nedbank supports the decision by the PSL and its board of governors to suspend Nedbank Cup fixtures during this unprecedented time.

"As a long-time supporter of football, we remain committed to our investment in the beautiful game and our current sponsorship of the Nedbank Cup. We are in continuous discussions with the PSL to map a way forward that takes into account the considerations of all stakeholders."

Maritzburg United’s togetherness and discipline‚ forged in a do-or-die fight to avoid relegation via the playoffs last season‚ had been a large part ...
Sport
1 year ago

Sponsors including Nedbank, MTN, Telkom and Absa pay the PSL to engage with their customers. The PSL's financial statements tabled at its AGM in November showed that Nedbank paid R80m for the previous season. This is the highest amount paid by a cup sponsor. There are three games remaining in the Nedbank Cup with the semis and final still to be played.

Baroka were drawn to play Bloemfontein Celtic and Mamelodi Sundowns are set to face Bidvest Wits in the two semifinals.

Due to the nature of the tournament, where the 16 top flight teams and 16 lower division teams compete, upsets are a norm. Last season, minnows TS Galaxy shocked the football fraternity by defeating Kaizer Chiefs to be crowned champions.

Malesela: 'You wake up in the morning and don’t know what you are going to do for the rest of the day'

Dan Malesela is pulling his hair out in frustration at home as he is without a coaching job and misses running the rule over players at the training ...
Sport
1 year ago
Next Article