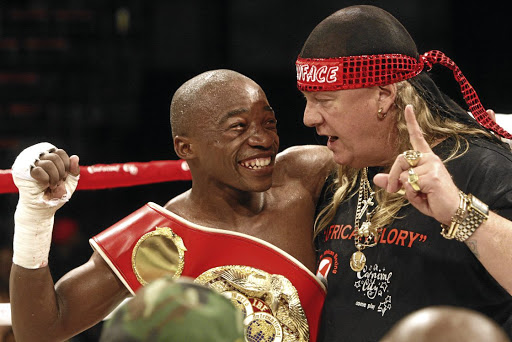 He may be gone but his spirit will live forever. That is how Zolani "Last Born" Tete and Moruti "Baby Face" Mthalane, the country's top professional fighters, described departed late trainer Nick Durandt.

Durandt guided their boxing careers to stardom. Today, marks exactly three years since the man - who produced 95 South African champions in all 17 weight divisions and 38 world champions - died in a motorbike crash in the Free State.

Tete described Durandt as a pillar to cry on.

Damien Durandt steps up to his father's legacy

He has big shoes to fill but 26-year old Damien Durandt is ready to continue his larger-than-life father's legacy. Nick Durandt‚ the revered former ...
Sport
4 years ago

"He was my father and friend. Nick was always there for me when I had personal issues," said the former two-weight world champion.

"As a trainer he would bring me back into the fight even when I felt I was out. I can talk forever about Nick because he was so good to me. I can't believe that it's been three years since he passed on."

Mthalane, who also won the IBO title under the same mentor, said: "I joined Nick early in my career and we won the SA title before winning the IBF and IBO belts.

"I understood what he liked and what he did not like. Nick wanted the best for his boxers. He wanted positive results and we worked very well together."

Expectation was that Mthalane would join Durandt's son Damien who took over after Nick's retirement but Mthalane instead teamed up with Vusi Mtolo and Colin Nathan.

Damien has just produced a WBC cruiserweight champion in Ilunga Makabu. The Congolese began his career under Nick Durandt in 2008.

Meanwhile, Fightnews.Com has reported the passing of referee Eddie Cotton of New Jersey who died of the coronavirus on Friday. He was 72.

Cotton officiated in hundreds of fights as a referee, and was the third man in the ring when Thomas Oosthuizen defended the IBO super middleweight belt against Rowlands Bryant in 2012.

Cotton was also in the ring for George Foreman's last boxing match which he lost to Shannon Briggs in 1997.