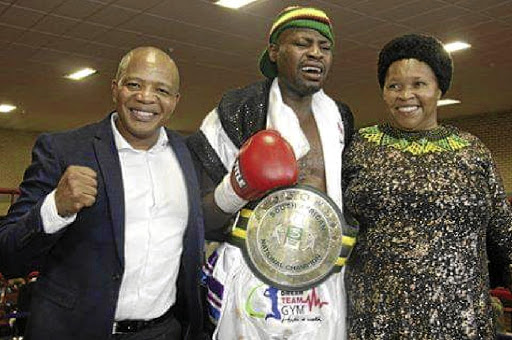 It has since emerged that Free State boxing promoter Lebo Mahoko had nothing to do with split between boxer Simon Dladla and trainer George Khosi, Dladla has confirmed.

This is contrary to Khosi's claim last week when he quoted Dladla, saying Mahoko threatened to stop giving the newly crowned SA junior middleweight champion fights if he did not leave Khosi's Hillbrow Boxing Club.

Dladla cleared Mahoko of any involvement and also denied talking about Mahoko to Khosi.

"I boxed with George from the amateurs and I learnt many things under him but the time has come for me to leave him and grow as a boxer.

The promoter has nothing to do with this. I don't know what this guy [Khosi] is talking about. I left on my own," said Dladla, who won both the Gauteng and SA belts under Khosi.

A relieved Mahoko said: "At least you got the story from Simon now because I had been put in bad light by George's comments. It seems there were problems there even before I came into the picture to give Simon a chance to fight for the SA title in December.

"Simon once told me that he wanted to leave that gym because there was drama. I drove to Johannesburg to meet with these guys but Simon was not available. I spoke to George and made a plea that they must resolve whatever differences they had."

Mahoko said the pair had a conflict in public at the weigh-in for his tournament.

"Simon did not want to sign for George's 25 percent of his purse money because he said George never trained him. Again, I initiated peace and he signed," said Mahoko.

"Simon called me at the beginning of March and said he had nowhere to go because he has left George.

"I then said he can go and ask for help and sparring with trainer Vusi Mtolo who trains my other boxer Nkululeko Mhlongo," Mahoko said.