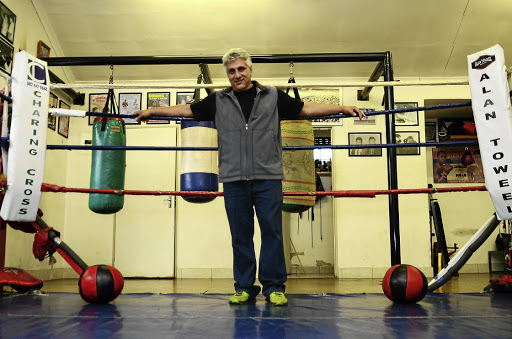 Alan Toweel in his garage, which he has turned into a gym to develop young talent.
Image: Mduduzi Ndzingi.

Alan Toweel Junior - who has been running a boxing gym in Linden, Joburg, for more than five years - hopes to produce his first SA champion when Nkhensahosi Makondo opposes Simon Dladla for the vacant SA junior middleweight belt in Free State on December 13.

The 54-year-old son of the late great trainer Alan Toweel is on the verge of producing a national champion. His boxers have only won marginal
titles; the WBA Pan African and ABU SADC belts.

His two fighters Rofhiwa Maemu and Frank Rodriguez failed to win SA titles against then featherweight holder Azinga Fuzile in 2017 and Nicholas Radley for the light heavyweight crown in June.

Toweel pins his hopes on the hard-hitting Makondo from Malamulele, who will oppose another tough customer Dladla for the vacant domestic belt in Kroonstad.

Makondo has six knockouts in six wins against three losses. Dladla has knocked out four of his five opponents. The fight will be staged by Lebo
Mahoko's Dream Team.

The belt was relinquished by Mahoko's recently crowned middleweight champion Nkululeko Mhlongo. Dladla from Free State is based in Joburg under George Khosi and promoted by Mahoko.

But in the interim Toweel's other boxers Sikho Nqothole and Bangile Nyangani will challenge for IBO Africa and WBA Pan African belts in Eastern Cape on Saturday.

Nqothole will welcome James Kibanzange for the IBO Africa junior bantamweight belt, while Nyangani will be up against Selemane Bangaiza for the WBA Pan African mini flyweight strap. Kibanzange and Bangaiz are from Tanzania.

Toweel is one of the few trainers that are busy despite not having a strong promoter dedicated to his boxers.