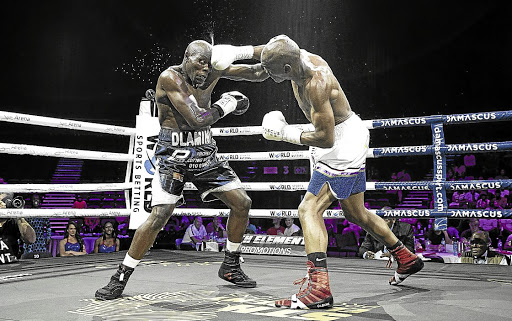 "John must be very careful of what he is wishing for," Mahoko said.

Mhlongo is an enormously talented boxer from Eshowe in KwaZulu-Natal who hits very hard .

"Bopape will soon find out if he thinks what Mhlongo did to Walter Dlamini (TKO 4 last month) was a fluke," said Mahoko of Dream Team Promotions.

"I've heard his cry; I've listened and he's got my full attention. John will definitely be accommodated early next year." said .

Bopape, from Alexandra township, called on Mhlongo for a showdown after knocking out No 5 contender Wade Groth in round one on Sunday.

Mhlongo is within the three-month period of making a voluntary defence, which means choosing any of the top 10 rated contenders. Bopape is rated No 6.

"This is very interesting. Dlamini stopped Wade in one round for the middleweight title and he promised to do the same to Nkululeko. You know very well what happened in that fight. Now John stops Wade and thinks he can repeat that with Mhlongo. He must begin preparing now because we don't want excuses."

Betting favourite goes down in first round.
Sport
2 years ago

Big strides made as promised to Anton Lembede

South Africa and the region today, its character of Struggle and its futures, are inseparable from the nascent history of collusion of race, maize ...
Opinion
2 years ago
Next Article