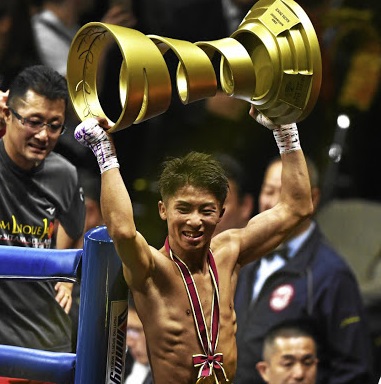 But the 26-year-old Japanese star, who went into the final of the World Boxing Super Series (WBSS) holding the regional WBA and IBF belts, cannot be referred to as the undisputed bantamweight champion.

That is how Zolani Tete reacted to Inoue's points win over the vastly experienced former four weight world champion. Donaire suffered his sixth loss against 40 wins while Inoue remains undefeated after 19 fights.

Inoue - who has previously held three world titles in two weight categories - also walked away with the Muhammad Ali trophy.

"I first want to congratulate Inoue for his win," said Tete, whose injury to the shoulder forced him out of the semifinal against Donaire.

"Secondly, Inoue just cannot call himself the undisputed bantamweight champion when he holds only two belts."

The undisputed champion must hold all four - WBA, WBC, IBF and WBO boxing belts - and the last in this era to achieve that feat is Oleksandr Usyk.

The Ukrainian held them in the cruiserweight division and he was also the first boxer in history to capture the Muhammad Ali trophy.

That was after he had won the WBSS series in the cruiserweight class last year.

Tete holds the WBO strap which will be on the line against Johnriel Casimero in the UK on November 30. Nordine Ouabaali from France is the reigning WBC holder.

"It's high time that I and Inoue meet to decide the ultimate king of the bantamweights," said Tete.

WBO bantamweight champion Zolani "Last Born" Tete is hopeful that he will get a chance to face newly crowned WBA and IBF titlist Naoya "The Monster" ...
Sport
2 years ago

Siboniso “Tiger” Gonya summed it all up nicely when he explained how he felt after being shown the stars by Zolani “Last Born” Tete in their WBO ...
Sport
2 years ago
Next Article