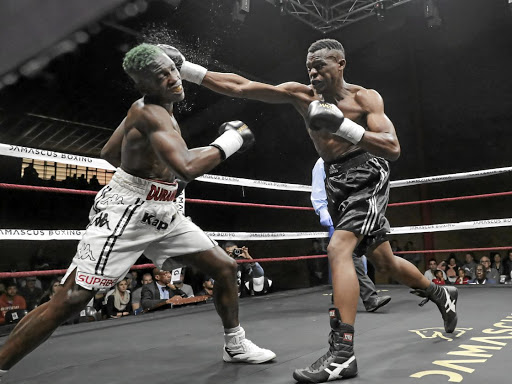 It is precisely the reason why we watch boxing - and sometimes question our love of the sport.

Fighting in front of a big crowd,
comprising mostly his followers at Turffontein Racecourse, south of Johannesburg, Groth was clearly the betting favourite against an opponent who has lost seven of his 14 fights.

But Bopape from Alexandra upset the bookies when he pulverised Groth into submission in the first round. Groth did not even get to justify why he was favoured to win the eight-rounder.

In boxing, eye injuries are few and far between, but when they occur they end careers.
Sport
2 years ago

Bopape, who possessed power which he flashed early in the round, let lose a left hook which jolted Groth's chin and he was down for a count. Sensing injury, Bopape followed up with a series of combinations on the defenceless and already hurt Groth. Ncapayi aptly stepped in to rescue Groth, much to the shock of Groth's fans.

"I want Nkululeko Mhlongo," shouted Bopape who will definitely replace Groth as the No 4 contender. Mhlongo has just won the SA title from Walter Dlamini who ended Groth's short reign through a first-round demolition in December.

Mhlongo will be expected to make a voluntary defence three months after winning the belt, and the stylish boxer from KwaZulu-Natal will defend against an opponent of his choice, and he could well chose Bopape.

The bout between Bopape and Groth headlined the eight-bout development card of Real Steel Promotions. Top-rated cruiserweight contender Chris Thompson, who injured his left hand, still went on to register a lopsided-points decision over Limbani Lano from Malawi in their six-rounder.

The bout of the night belonged to the give-and-take cruiserweight six-rounder between Julian Cook and Tsepo Malope. Cook, a former mixed martial arts fighter, emerged victorious on points.