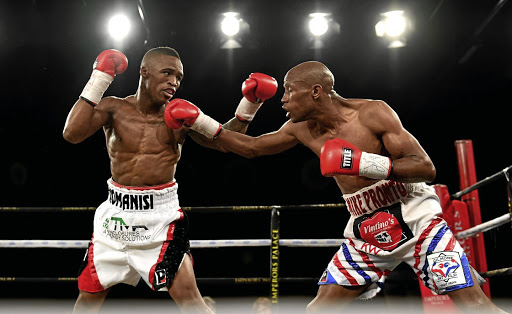 Michael Mokoena, right, will be in action in Indonesia on Sunday.
Image: Gallo Images / Johan Rynners

Michael "Pronto" Mokoena has promised to continue where Jacob "Baby Jake" Matlala left off when the pint-sized pugilist won the IBA junior-flyweight belt 22 years ago.

"I don't know Yordan and I have never heard of him. I just checked him out on YouTube to see how he fights. He's a very straight boxer who just comes forward," said Mokoena, who jets out to Indonesia with trainer Anton Gilmore today.

"I'll definitely bring the IBA title [back] here at home."

Mokoena said the purse money he will get is OK and described it as the best he's received since he first boxed as a pro in 2015.

The married father of a four-month-old son is self-employed and doubles up as a personal trainer at Gilmore's Box Office Gym in the south of Johannesburg.

Yordan's reign as the IBO holder was cut short by Simphiwe "V12" Vetyeka in 2013. But Yordan regained that belt after Vetyeka had vacated it following his sixth- round stoppage win for the WBA Super belt from Yordan's homeboy Chris John.

Yordan, who defeated Sipho Taliwe, has 39 wins in 44 fights.

Veteran female referee and judge Siya Vabaza-Booi has won the WBF's referee of the year award. This happened during its annual convention that took place in Medebach, Germany, this week. The WBF's headquarters are in Cape Town.

Nathan proud as Mthalane gets recognised

Vabaza-Booi, from Duncan Village in the Eastern Cape, has been in the fight game since 1989. She had to contend with discriminatory rules and attitudes including the infamous Boxing Act of 1954, which barred women from being part of the game at any level.

Vabaza-Booi broke down barriers and became the first female ring official. She has won multiple local awards, even beating her male compatriots.

"I never expected the award; I am humbled," she said yesterday just after touching down in SA. "I was just fooling around with officials from all over the world during dinner, the next thing my name gets mentioned - referee of the year. I almost choked on my food.

"I love what I am doing. I have the energy but deep down in my heart it's time for fresh blood. I've done WBC, IBF, WBA, WBO, WBU and IBO fights. I've seen it all."