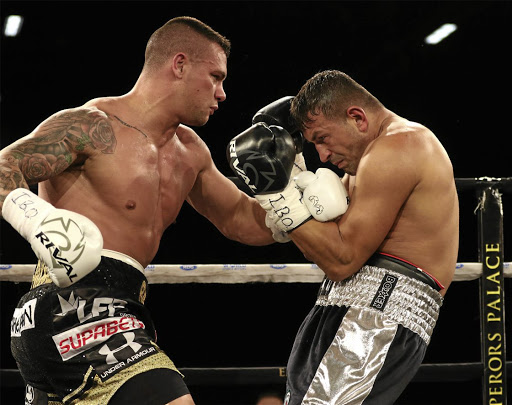 Kevin Lerena, left, with Sefer Seferi during their cruiserweight championship at Emperors Palace in Ekhurhuleni at the weekend. Lerena scored his first knockout in five years.
Image: ANTONIO MUCHAVE

Kevin "Two Guns" Lerena predicted a knockout win on Saturday and the boxer with a perfectly chiselled body delivered.

He knocked Sefer Seferi in the third round of their cruiserweight bout that was scheduled for 12 rounds.

Lerena, who registered the fifth defence of his IBO cruiserweight belt, last knocked out an opponent in 2014 and that was Georgian Gogita Gogiladze.

Referee Jean-Robert Laine from Monaco reached the count of 10, while 40-year-old Seferi from Switzerland was still on the floor.

Meanwhile, Lebo Mashitoa was denied a deserved unanimous points decision win by one judge who scored the one-sided 10-rounder in favour of visibly beaten Keaton Gomes 96-94. It left a bitter taste for all the diners at Emperors Palace for the Golden Gloves tournament.

Even Belgian female judge Olen Pobyvailo, who officiated in the Lerena-Seferi fight, could not hide her dismay.

"If you want to be generous, you can give Keaton at least two rounds of that 10-rounder. Don't talk about him winning," Pobyvailo said.

The current board of Boxing SA will not do anything to that official. It has not done anything to others.

Last month, a lawyer forced the BSA to appoint a panel of independent officials to review a national title fight he felt was wrongly scored in favour of the loser.

Some stakeholders must pin hopes on sport minister Nathi Mthethwa to appoint a new board next year.