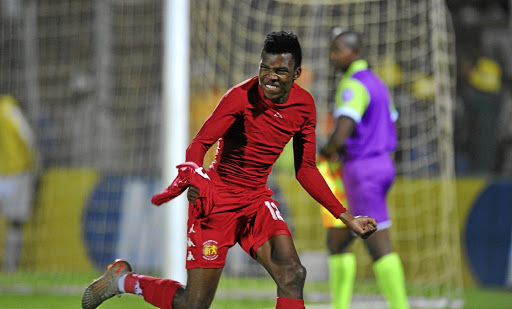 The atmosphere was thick and you could cut it with a knife as Mokete Mogaila prepared to take his penalty for Highlands Park against Polokwane City at Makhulong Stadium on Tuesday.

The pressure was just too much on the tiny speedy winger, but Mogaila bravely stepped forward to convert, sending the Lions of the North into the final of the MTN final, to contest for the R8m first prize.

Famously known as "Makhokhoba", the 24-year-old had come in the game as a late substitute for Lindokuhle Mbatha to give the Lions of the North some new ideas in attack.

It took the trouble of carrying the hopes, dreams, wishes and aspirations of his club, management and thousands of their fans.

His bravery paid dividends when he rattled the net, sending City's keeper George Chigova in the opposite direction.

Mokete "Makhokhoba" Mogaila became teary-eyed as he described what was going through his mind when he stepped up to score the winning penalty that ...
Sport
2 years ago

"I was not scared because I've been practising penalties most of the time at training, so that is one of the reasons I was confident," he said yesterday.

Mogaila was part of Highlands Park team that lost on penalties to AmaZulu in the last 32 of the Nedbank Cup in January, but he was not one of the takers.

He was just motivated from there to start practising penalties after the loss to Usuthu.

"I did not take even one penalty and after that loss, I lifted my head up and started practising them.

"I always had hope that one day I will represent my team in such situation and it happened [on Tuesday night]. I am grateful to my technical team for giving me the opportunity to play."

Highlands qualified for their first final in the PSL era, and they will pin their hopes on coach Owen Da Gama, who won the Telkom Knockout with Silver Stars in 2006, to guide them home.

After 180 minutes without a goal scored, substitute Mokete Mogaila slotted the decisive kick in the lottery of the penalty shootout and Highlands ...
Sport
2 years ago

Owen da Gama was thrilled to see Highlands Park beat Orlando Pirates 1-0 on Saturday to qualify for the semifinals of the MTN8, but he regretted the ...
Sport
2 years ago

Owen da Gama was thrilled to see Highlands Park beat Orlando Pirates 1-0 on Saturday to qualify for the semi-finals of the MTN8‚ but he regretted the ...
Sport
2 years ago
Next Article