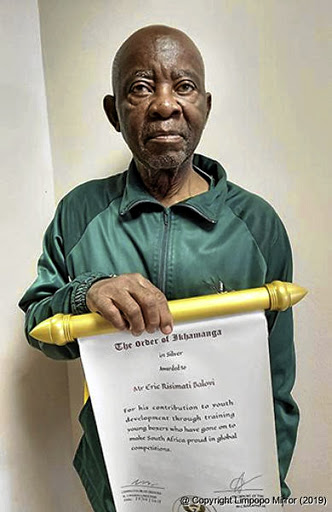 Malamulele's Boxing Gym has been confirmed as the venue for Tsatsa Media Promotion's maiden tournament on October 4. This is the home of SA's only six world titles, three-weight division holder Cassius "Hitman" Baloyi

The gym is owned by respected veteran amateur boxing trainer Eric Baloyi - the man who honed the skills of many amateurs, including his son Cassius, who went on to become global stars.

President Cyril Ramaphosa acknowledged 76-year-old Baloyi with the Order of Ikhamanga (silver) in Pretoria in May.

The department of sports, arts & culture handed over the gym to Baloyi in 2009.

"I also dedicate my tournament to all the boxers that came from Baloyi's stable," he said, adding that action would commence at 6pm because he was targeting mainly the youth.

Topping the card will be the WBA Pan African junior lightweight fight between champion Sibusiso "Spook" Zingange against Paul "The Wolf" Mangxilana.

Maemu, from Venda, is coming from two fight losses while Sibiya, from Mpumalanga, has lost three consecutive fights. They will meet in the main supporting clash over 10 rounds and there will be six more bouts.

Chabani said the paying public will part ways with R150 to witness the action.

It's over for angel

ISAAC Hlatshwayo called time on his boxing career yesterday and took the emotional but long overdue decision to walk away after 13 years in the ring. ...
Sport
8 years ago