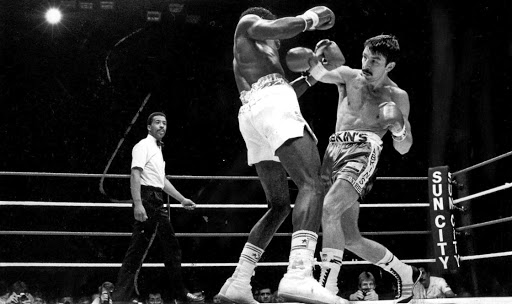 Today - 28 years ago - Brian Mitchell scribbled his name in the annals of South African boxing history by becoming the first local boxer to unify world titles.

Arguably SA's best pugilist of all time whose only loss was to equally competent Jacob "Dancing Shoes" Morake reigned supreme as the WBA junior lightweight champion for 10 years.

Morake made 12 defences under trying circumstances outside South Africa due to apartheid laws.

Mitchell later suffered a controversial split draw to IBF holder Tony "The Tiger" Lopez at home in Sacramento on March 15 in 1991. The pressure, regarding that decision, was such that the hierarchy of the IBF sanctioning body had to order a rematch.

But Lopez was allowed to make a defence, which was a stoppage of Lupe Gutierez at Caesars Tahoe Outdoor Arena on July 12.

The champion then met Mitchell on September 13 in 1991 and the "Road Warrior", as Mitchell later became known, was just too much on the night.

James Small: The colourful life of one of the Rainbow Nation’s fallen warriors celebrated

They came from way across the horizon to celebrate the rich‚ colourful life of one of the Rainbow Nation’s fallen warriors.
Sport
2 years ago

Mitchell was declared the winner by a unanimous points decision which means all three judges scored the fight his way - and he became the first local boxer to hold two legitimate world titles.

"I did not even notice that it is now 28 years since I beat Lopez; time flies, but thank you for reminding me of that biggest moment in my life especially after being robbed in our first fight," he said yesterday.

Mitchell did not defend his IBF strap, but instead retired in the fight game only to come back in 1994 to face Mike
Evgen at Sun City.

Mitchell won that fight by a stoppage and he later defeated Silverio Flores also at Sun City in 1995 before finally calling it quits with an impressive fight record of 45 wins, 21 knockouts, a loss and three draws.

Mitchell was inducted into the International Hall of Fame in Canastota, New York, in 2009. The man who turned 58 on August 30 - currently serves the sport of boxing as a commentator for TV channel SuperSport and is also a fight publicist for Golden Gloves.

Step up may be a matter of survival.
Sport
2 years ago

Veteran referee made a mark