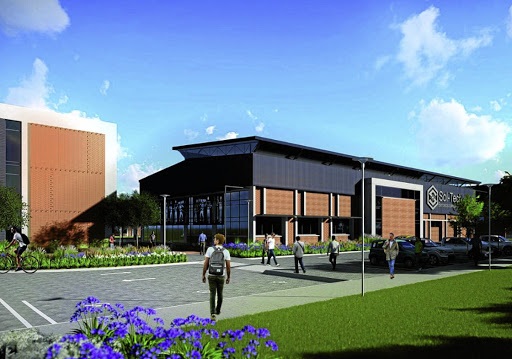 An artist's impression of the Afrikaans-medium Sol-Tech University in Centurion that the union Solidarity is planning to build to advance the education of Afrikaners.
Image: Solidariteit \ Twitter

The move by union Solidarity to establish an Afrikaans-medium college should be applauded as an example of a proactive community intervention to address a social need rather than wait for the government to provide.

The construction of the R300m occupational training college has been hailed in some quarters as a progressive and lambasted in some as a step backward, with others seeing it as a racially motivated project.

The all-over-the-show Gauteng education MEC, Panyaza Lesufi was the first off the blocks in accusing those involved in the building of the Afrikaans-only college as being "anti-transformation". He further dismissed the idea of the college as "not good for the future of our country".

As citizens we also know what is not good for this beloved country of ours. What is undesirable is the continuation of the collapse of our public institutions such as our schools and hospitals.

Solidarity, the trade union that is linked to AfriForum, announces that it will soon be opening an Afrikaans-medium private university.
Opinion
2 years ago

The state of education in our public schools leaves much to be desired with learning outputs not matching up to the financial inputs.

Our pupils struggle with the basic scholastic skills of reading and writing in grades in which they should be grappling with higher order education concepts such analysis and creativity.

What is also disheartening is the continued stranglehold the anarchic South African Democratic Teachers Union (Sadtu) continues to have on the department of education. The results of this are evident in our education system continuing to sink deeper into the mire.

Lesufi should be familiar with all of these and more. Our schools have become dangerous places where hooligans and murderers masquerading as pupils rule the roost.

It can be argued that confidence in public education is at its lowest ebb with those who can afford opting for private education. Our universities also find themselves entangled in a mess of misguided, unsustainable and unrealistic policies of Lesufi's party.

The free higher education arrangement has been likened to a time bomb and not in sync with our economic realities.

The state of our hospitals is also lamentable.

It is, therefore, totally understandable for groupings such as Solidarity to embark on its current project. It has become a necessity in the face of a failing government. The reality here is the ANC government cannot run a bath if called upon to do so.

As for Solidarity's college being an Afrikaans-medium one, which Lesufi finds so irking, this should also be seen as an example of what should be emulated rather than be excoriated.

The construction of the college is a self-reliant project, which will be financed by its membership. Members are expected to donate R10 to the building fund every month.

According to Solidarity's COO Dr Dirk Hermann, "the only way we can ensure a future is to build one ourselves". How do you like that one, Panyaza Lesufi?

Donald Trump’s new national security adviser was an undergraduate at the University of the Orange Free State when it was still an all-whites ...
News
2 years ago

Gauteng MEC for Education Panyaza Lesufi has slammed an Afrikaans university that is set to open next year.
News
2 years ago
Next Article