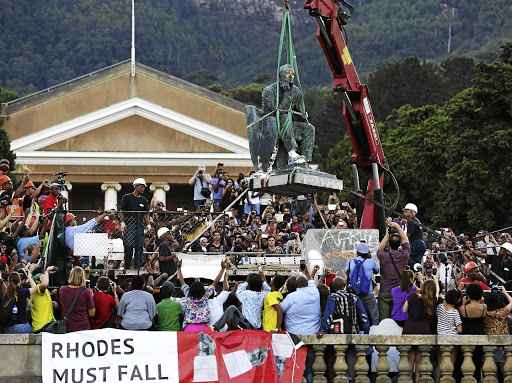 The crowd cheer as the Cecil John Rhodes statue at the University of Cape Town got removed by students. /ESA ALEXANDER

Rhodes University is one of the institutions that have been at the centre of the transformation debate. This was evident in 2017 when after 115 years of existence, the students demanded the renaming of the university.

The institution's vice-chancellor Sizwe Mabizela said the community of the university council decided to retain the name.

"The council decided that the university will continue being known as Rhodes University. However, the issue of transformation has been very broad at our university and there are various dimensions to look at - student population in terms of the demographic representation our university has transformed significantly. The majority of our students are black and black African. I think we have made significant progress in that regard," Mabizela said.

He said they have also made a huge stride in terms of administrative and support staff and for the first time in the history of the university, they have a black registrar and a first black woman who is a director of human resources.

"I am just mentioning the senior positions so that you can have a sense of what is happening there. We have also transformed our curriculum, even though one cannot just change things overnight. The curriculum by its nature is transformed over a period of time but we have engaged the debate on decolonisation, embrace knowledge from other parts of the African continent," Mabizela said. 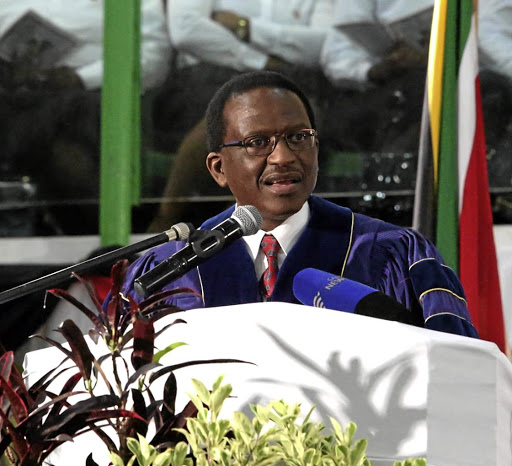 After 1994, many universities embraced transformation as a crucial phenomenon that sought to do away with colonial, apartheid and imperial legacies.

In March 2001, the then minister of education Professor Kader Asmal released a national plan for higher education according to which the number of public higher education institutions would be reduced from 36 to 23 through the mechanism of mergers.

The new DHET subsumed certain functions that previously resided in the department of labour, including implementation of the skills development act and responsibility for oversight of the South African Qualifications Authority (Saqa) and the Setas. The number of students enrolled in public universities increased by almost 83,000 between 2010 and 2016 and the most rapid growth occurred among black students at an annual average of 2.8%.

The latest post-school education training monitor shows, the female share of academic staff increased substantially by 2.8% points over the 2010-2016 period to 46.9% but still remains low at senior levels.

While white academic staff are still the largest group, their numbers have been declining at 0.8% per year over the period of 2010-2016.

The strongest growth has been documented among black academic staff which increased by 2,300 over the six year period, followed by coloured staff.

Also, black individuals make up the majority of academic staff at all qualification levels below PhD.

A lot has since changed in higher education sector as the historically white universities are now led by black vice chancellors. Also, a couple of universities have been under the hammer for racial incidents.

The five University of the Free State (UFS) workers who were humiliated in a racially inspired video launched their own cleaning company on Thursday. ...
News
7 years ago

The University of Free State is one of those universities that attracted a lot of attention even from abroad when the Reitz Four video caused a national outcry.

The video showed cleaners made to eat meat which had been urinated on by four white students, who video taped the incident and made mockery of the incident. There was also the issue of the removal of colonial statues at universities.

One of the incident was the #RhodesMustFall campaign, a protest movement by students which was directed against a statue of Cecil John Rhodes at the University of Cape Town (UCT).

There were recommendations to move the towering statue of the former colonial president of the Orange Free State from the main campus of the University of Free State.

The University of Pretoria also phased out the Afrikaans as the official medium of instruction at all its campuses and residences.

English is now the primary language of communication and administration after the policy was adopted in 2016 by the university's council and senate after extensive consultation process and recommendations from all interested parties.

The university, known to some as an Afrikaner enclave, appointed its first black vice-chancellor and principal Professor Tawana Kupe.

One of the universities that have gone through extensive transformation is the University of Johannesburg (UJ).

It came into existence as a result of the merger between Rand Afrikaans University, Technikon Witwatersrand and the Soweto and East Rand campuses of Vista University.

UJ spokesperson Herman Esterhuizen said transformation at the institution was an ongoing, dynamic and qualitative process that enhances the development of knowledge for responsible citizenship.

"UJ has position itself as a modern African city university that is cosmopolitan in character and asserts academic freedom in the liberal, progressive and transformative values it espouses."