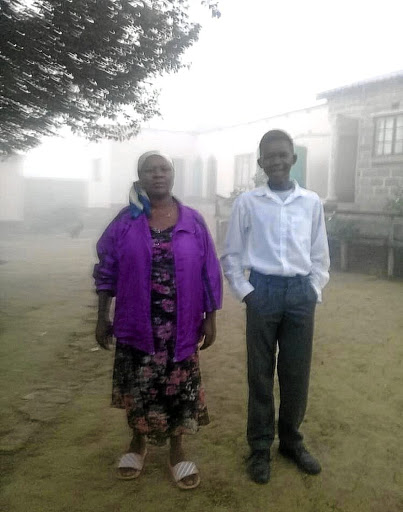 Noxolo Digretia Chiya is happy after she finally received the death benefit for her son, Siphelele, thanks to Consumer Line.
Image: SUPPLIED

Noxolo Digretia Chiya's struggle is finally over after she received her son's death benefit last Monday.

She thanked Consumer Line for helping her son, Siphelele, get what was rightfully his.

Jan Kgosana, of the Mineworkers Provident Fund (MPF), confirmed that Chiya's payment was effected on Monday. "We further apologise for any inconvenience caused as a result of the delayed payments in this matter," Kgosana said.

Chiya of Kutloanong in Odendaalsrus - a gold-mining town in the Free State - has been fighting for her son's right to benefit from his late father's estate for the past 13 years. The boy's father, Hluphuyise Ngwazi, was a mineworker at Harmony Gold where he was employed for 19 years until he died in 2004.

Chiya approached Consumer Line in 2017 after battling on her own to get her son's death benefit.

Though the Pension Fund Adjudicator made a determination in her favour, but nothing happened until she sought Consumer Line's intervention.

Her son was born out of wedlock and she was faced with the challenge of getting the wife of her late partner to accept her son as a beneficiary and to co-operate with the pension fund administrator, she said.

Her hurdle was that the wife of her late partner had been refusing to complete the required documents to allow the MPF to allocate funds to all beneficiaries.

She said this hurt her and her children - two of whom died without inheriting what their father had allocated them.

Her stumbling block is the wife of her late partner, who has been refusing to complete the required documents to allow the MPF to allocate funds to ...
Opinion
3 years ago

"I'm glad she finally realised that she too was blocking her own benefit after 13 years of struggle," Chiya said.

For two years Consumer Line patiently spoke to the wife who subsequently understood that the deceased's child had a right to inherit and also that she was not signing her rights away.

Chiya said when Ngwazi died he had a death benefit of R596,541 which became available for distribution among his heirs.

She said she did not know that her partner had a customary wife and children back home. She had to content with the customary wife of her late partner who wanted nothing to do with her late husband's death benefits.

"I'm happy that the whole thing is over and I also want to thank Consumer Line for helping me," Chiya said.

But all that is over after all beneficiaries received their money. The wife, who refused to be named, also thanked Consumer Line for helping on the matter.