Foreigners not the real target of fires of fury 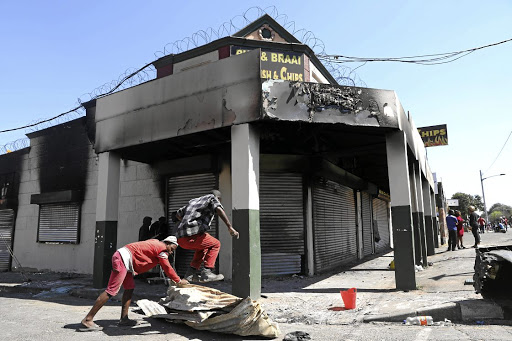 Metal collectors get into businesses after shops were looted and burnt on Jules Street, Malvern, in Johannesburg last Sunday. /Thulani Mbele

Criminal activity. Xenophobic foment. Civil unrest. Taxi warfare. Gang violence. Talking heads on TV and motormouths on radio talk shows are having a field day, patting themselves on the back for yet another new phrase they've coined in an attempt to analyse the malady that has gripped this nation.

But when you sit back and try to analyse the analysts you come out feeling very foolish for you ask yourself: what is it that is being analysed when everything is so clear? No amount of phraseology is going to hide the simple fact that this country is teetering on the brink of an abyss.

If you believe, as some do, that the foreigners are a problem, once you've removed them from the equation, the crisis will not suddenly disappear.

Just like during the dark days of apartheid South Africa, your identity card or document could spare your life.
News
2 years ago

In fact, it will probably shock many to discover that the foreigners who have been blamed for stealing jobs from locals, from putting locals out of business, from even stealing women from locals, are not a problem at all.

South Africans are afraid to face the simple truth that unless they look themselves squarely in the mirror and agree to remove the blemishes that they will see on their collective face, this country will continue its descent into the abyss.

At the height of apartheid the masses rose against an unjust system that denied them citizenship in the country of their birth; that denied them opportunities on the factory floor, at schools and universities, that reduced them to beggars.

Today, the masses are rising. Needless to say, they start by venting their anger on each other, and on those less fortunate than themselves - in this case, foreigners.

But once the foreigners, who currently form an unwitting buffer between mass anger and the government, have been removed who knows what is to happen?

There are many things that are an ongoing weakness in the structure of South African society today.
Opinion
2 years ago

In 1976, the masses were ridiculed by the ruling elite: "How can these ungrateful savages burn down their schools and libraries, for which the white taxpayer paid so much money?"

In 1986, the masses took the fight higher - getting rid of black surrogates of the apartheid regime. When this buffer between the masses and real power finally collapsed, there was no place to hide for the ruling elite. It was the end.

Our current rulers, many of whom were at the forefront of the Struggle of the 1970s and 1980s, should have learnt from this recent history.

When people complain about the shortage of housing, jobs, affordable education, the rulers have a tendency of showing no immediate interest in the grievances. Until people burn something down. Then the authorities begin to listen.

But by then, a seed has been planted. People have come to realise that if you want to have a conversation with the authorities, you burn something down.

What has been happening in pockets here and there seems like a replay from the 1980s. Except that the rulers are no longer arrogant white Afrikaners. They are black like the masses who are rising. Which makes it even more palpable.

The masses can't help but wonder: how can these people, our own people, act like the oppressors of yore, if not even worse?

Our leaders [need to] get off their butts and deliver on the promises they made when they were asking for our votes.

They know what needs to be done. Now.