Bakkie driver accused of riding over security guard back in court 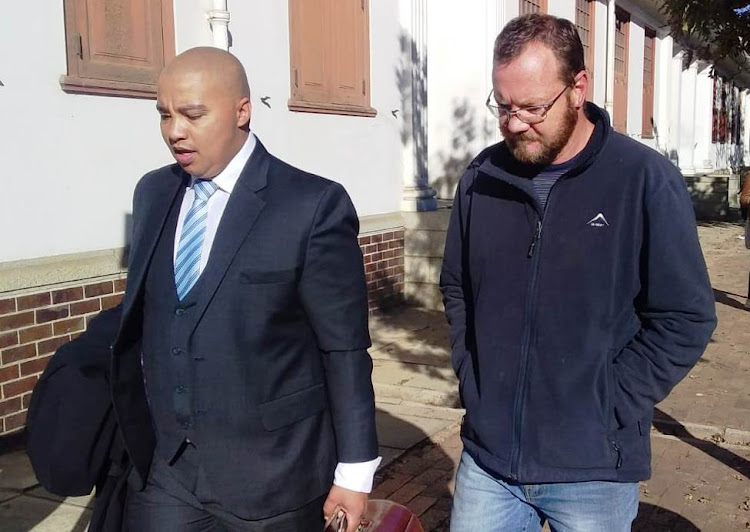 Johan Steyn, right, and his lawyer, Bruce Hendricks, at a court appearance in May. Steyn has been charged with attempted murder.
Image: Philani Nombembe

A man accused of driving over a security guard in a shopping centre parking lot appeared briefly in the Stellenbosch Regional Court on Friday.

Johan Steyn, 38, is facing a charge of attempted murder after the incident, captured on video in April.

Wearing a brown leather jacket, he appeared calm while the matter was postponed until October 4 to give the defence an opportunity to consult.

“My life will never be the same again,” security guard Mzwanele Wellem, 38, told MatieMedia in August. He was still attending sessions with a psychologist and physiotherapist.

“The scar on my head will never disappear. I am very scared to show my daughter, who is eight years old. She will ask what happened and then I will have to explain to her what happened,” he said.

CCTV footage of an incident in Stellenbosch showed a white Opel Corsa bakkie knocking a man down and driving over him.

Steyn pleaded with the court to release him on bail in May, saying his incarceration had put strain on his family.

"My incarceration has placed severe emotional strain on myself as well as my family. The conditions in the cells are of a very bad nature and I fear I will contract other diseases and viruses should I not be released from custody," he said in an affidavit.

CCTV footage shared on social media showed a white bakkie wanting to proceed against a one-way system in a shopping centre car park, while a guard remonstrated with the driver.