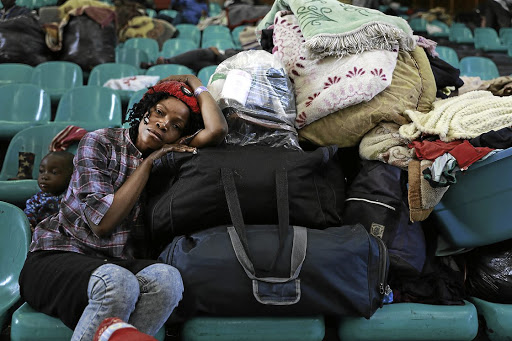 A distraught Mozambican woman waits for help at the DH Willliams Hall in Katlehong, east of Johannesburg, after she was hounded out of her home by militant youths.
Image: ALON SKUY

Just as South Africa is trying to convince the world that it is "open for business", the violence sweeping over the country demands a more honest reflection about the true state of the nation.

Although the governing party and the opposition provide varying accounts for the devastating violence ravaging SA society, they agree on one important factor.

Inequality is at the heart of the instability across communities.

On Monday, international relations and cooperation minister Naledi Pandor linked the attacks against African foreign nationals by locals to the legacy of apartheid.

"The legacy of apartheid was deep and rigidly entrenched inequality for black people," she said.

Of greater consequence is that this inequality has continued to be pervasive in a democratic SA. Pandor conceded as much.

"While political and civil freedom soothed the wounds of apartheid, the long-term and worsening economic inequality has deepened resentment and caused antipathy towards brothers and sisters from other African countries, and it is this anger that we have to confront, eradicate and respond to. Perceptions that black migrants take up black jobs and displace black workers have caused increased deterioration in the relationship."

Weighing in on xenophobia and the violence, leader of the EFF Julius Malema said the private sector should take full responsibility for fanning the animosity between locals and foreign nationals.

"It is white people who employ foreign nationals. After employing them, they come to us and say, 'don't you think these borders being loose have let these levels of unemployment', planting this self-hate amongst us.

"And because we are unemployed, and because we've got government with no solutions to [the] crisis of poverty and widening gap between the rich and the poor, we begin to start believing that."

Since the dawn of democracy, rather than find lasting solutions to this problem, those who wield political power together with those who wield economic power have stood by while unemployment and poverty have dashed the hopes of many for a better life.

The country's big cities and surrounding townships are the epicentre of internecine violence among poor people competing for increasingly limited opportunities and resources.

What is for certain is that foreigners are not the cause of SA's problems and thus cannot bear the guilt for their consequences.

Pandor conceded further the fault lies with the ANC government's implementation of policy.

"SA adopted progressive laws on migration and . expanded access to the country, with little regard to the needs of immigration management and lack of a plan as to skills or industrial development needs."

Poor and excluded South Africans may be the victims of successive governments that have failed to plan and cater for their needs, as well as a private sector that has equally been more interested in profiting from rather than developing them.

The poor have power over their own actions and thinking. They commit crimes against foreign nationals and locals of their own volition. But this violent response is not unique to poor people in SA.

In The Spirit Level: Why equality is better for everyone Richard Wilkinson and Kate Pickett show that where people cannot maintain their self-respect with "good education, nice houses and cars, good jobs, new clothes", violence becomes the currency of choice.

For SA is to survive and thrive into the future the government, opposition, civil society and corporate sector must confront and address the root causes of inequality.

The current wave of attacks against foreign nationals is a clear sign that state security in general, and crime intelligence in particular, are very ...
Opinion
2 years ago

Police are investigating the death of a 32-year-old woman and an unidentified man after chaos broke out in the Samora Machel informal settlement on ...
News
2 years ago
Next Article