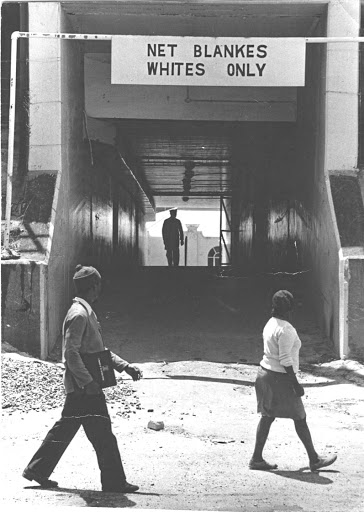 The apartheid regime aggressively whipped the black population into a state of fear for its racial laws.
Image: Andrzey Sawa

South Africa's brutal history of white supremacist oppression is often recounted in the material sense of the lived experiences which grabbed the world's attention.

Although this is important, we must not forget how the strategic use of language interlocked with the legislative and material enactment of black people's oppression.

Racial slurs are plenty in South Africa and in recent years we have seen unprecedented use of the law in this discursive domain. Penny Sparrow, Vicky Momberg and Adam Catzavelos became public examples of just how criminal the harm of using the k-word is.

Recently, ZACP leader Kanthan Pillay tweeted a disingenuous analysis of how the word has no power and should not cause offence, even referring to himself by it. In response, there has been an alarming backlash from white people contesting what they believe is their right to use what they consider just a word.

Lengthy explanations have gone into excavating the etymology of the word which can be traced back to the Arabic "kafir" which means "nonbeliever". The question remains, if it is such an insignificant word, why is it such an affront to be denied use of it?

It is true that the word has its origin in Arabic and that the original meaning was directed at shaming religious deviance. This truth in itself points to the violence of its intention when we look at the effect of colonial violence on African spirituality.

As a means of controlling even people's souls, polytheistic African spirituality was whipped out of them through the imposition of Christianity, making the very characterisation of someone as a "nonbeliever" extremely violent.

It was also understood that through Christianity, African people could be humanised by turning away from the animalistic practices they were considered to be partaking in.

Making sure that the people most affected by the problems we try and solve are central to crafting the solutions we seek remains utterly important.
Opinion
2 years ago

If we are going to play semantics with the word, we must understand that words do work, and cannot be separated from their contexts. It is also obvious that, in our context, only African people were targeted with this assault of conversion, and therefore the insult is also racialised and cannot be reframed for convenience. There have been many instances all over the world where words which have been historically used to debase a group of people have been reclaimed by those people.

The jury is still out on whether that is the best course of action, but it is for those who have suffered the dehumanisation at the hands of power to decide.

When we hear people who have never suffered the dehumanisation of words which became the discursive tools with which materially oppressive systems were built trivialise its impact we see again how easily black life is disrespected.

How difficult could it really be to listen when black people ask not to have their dignity impugned on? Why are we so eager to forget the brutality of a past that still strangles us in ways we still struggle to articulate?

It is not only on an individual level that words constrain and dismember us. It is in the materiality of the life chances that get denied to us by the power of the institutions that benefit from ranking humanity.

Apartheid was also a system of capital which ranked human life through capitalist ideologies linking labour and worth. In this way, most black people became poor and poor people mostly black. Today the consequences of such a hierarchy remain evident. When we see how the impact of words closely weaves itself into our understanding of human worth, we can see how black lives are directly impacted by the effects of those words which determine what they deserve.

I have written before about our reluctance to be deliberate in our efforts to transform a society which was intentionally made unequal. In the same way, we must be deliberate about remembering a history which constructed this dystopian reality we are forced to survive.

These were not just words uttered in innocence and the effects of those words on our psyches continue to shape our society, not only here, but everywhere that imperialism has reigned.