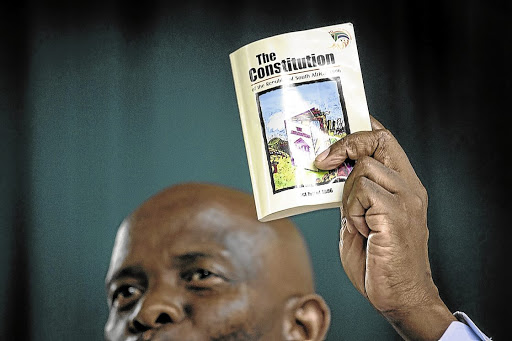 South Africa is hailed as having one of the best constitutions in the world. In some ways the post-apartheid euphoria about our ethical about turn still lingers as we learn who we are.

The contestation of law and justice is something we exercise proudly as a slight of our draconian past. It can never be said that the constitution is underutilised, but for all its exercise, what can it really achieve? What has really changed for all that this inspiring beacon of human rights should have enabled?

When the constitution was drafted, there was a negotiation that still considered the interests of our former oppressors (except for a few allies) as a form of fairness.

Because white people were not excluded from negotiations aimed at building what would be a new African society, a fair amount of what is now a constitutional democracy has the interests of former oppressors built into it.

To refer to an earlier column, I asked where we think all the prejudice and hatred went after the end of apartheid. Surely it did not evaporate into thin air. No, the oppression of black people, for many reasons, remains in the interests of white people in this country and the neo-liberal approach to transformation we have adopted simply puts the final nail in that coffin.

SA's democracy continues to battle the effects of its own character in that the social cohesion it has tried to forge through black forgiveness for white arrogance consumes itself in a never-ending cycle of disillusionment. Many people have lamented the fact that forgiveness was given before an apology came and that little has changed the apartheid-engineered poverty of black people, least of all the acclaimed constitution.

Whiteness still occupies the privileged position it always has. The mechanics of the society we have built remains that of the society we are said to have defeated and, in that way, we have simply rebranded an oppressive system to appear more palatable.

We enjoy the demise of petty apartheid by utilising public space unlimitedly, visiting places we've previously been denied of, but the grand scheme that excluded black people from citizenship remains intact.

The ideological and material systems we currently navigate are our apartheid inheritances - a reality that is criminal in itself. We are stuck with a constitutional democracy built on the oppression it was meant to remedy, which raises valid questions around what we have democratised. It may very well be that we have democratised oppression and diffused it throughout society as our own personal quirks.

Democracy failed to remedy inequality and in so doing placed those who retained their ill-gotten privilege in the same positions of power they always occupied.

The privilege and licence to oppress became a status symbol that one earns on merit. We now find ourselves aspiring to rule over people, in one way or another.

Yes, it can be said that the constitution remains the supreme law of the country and as such makes recommendations for correction of social ills, but the solution is always remedial. A society as traumatised as ours would have benefitted from some foresight dictating primary interventions for social behavioural issues that were inevitable.

An entirely new intersectional system, which is inherently black, queer, feminist and disability- centred would tend to the needs of every citizen. Ironically, though these ideologies centre the liberation of marginalised identities, they are about equality, which is something that scares those in power.

We must remember that none of the freedoms we have today were achieved by placating the fears of those in power.

Revolution must prevail as often as it is beckoned by injustice.