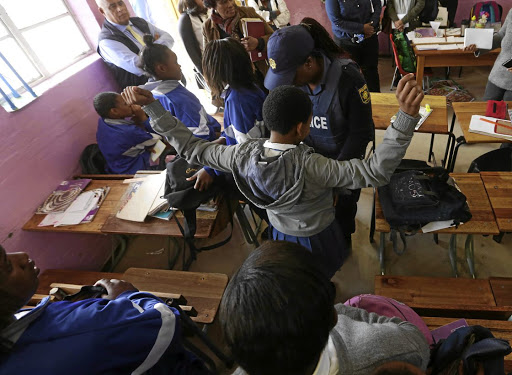 Police carrying out search and seizure operations should be the order of the day in SA schools until the crime and lawlessness is brought under control, says the writer. /ESA ALEXANDER

School had just started, and the kids were getting ready for their next exam paper and the teacher was explaining the procedure when two youngsters suddenly burst into the classroom.

There were screams and a near stampede as children cowered under their desks on noticing that one of the young men who had just burst in was carrying a gun.

Amid screams, one of the pupils reached into his desk and pulled a gun. Startled by this unexpected turn of events, the two assailants ran out of the classroom.

The armed student gave chase. Sounds like a Mzansi Magic movie. But this is how a teacher who called 702 Talk Radio described the scene at his Gauteng school.

This in a week during which Mohamed Mwela was granted bail by the Johannesburg magistrate's court after he allegedly stabbed three of his schoolmates two weeks ago. One of the three died of his injuries.

It has since been revealed that the pupil who was killed was himself facing an armed robbery case.

Undercover cops will be deployed to Forest High School, where a pupil was murdered, to prevent crime activities happening at the institution.
News
2 years ago

In my own home township of Mpumalanga, near Hammarsdale, a pupil was caught on a cellphone camera engaged in a fist fight with a teacher at Chief Luthayi High School. It is not clear what triggered the fight. An investigation is still under way.

Be that as it may, we find ourselves asking the question: what is happening at our schools? We are more than shocked. There was once a time when a child's life was governed by the trinity of home, church and school. But clearly that holy trinity has been torn asunder.

Schools were once the safest places in a child's life. They were places where a child not only felt safe, but he was guaranteed guidance in life. Teachers, in conjunction with parents and religious leaders, helped mould our children. There was order. There was respect. There was trust.

But clearly things have fallen apart. The centre is not holding, to paraphrase the poet WB Yeats. Mere anarchy is loosed upon the world. We are spinning and spinning in a helpless gyre of fear and confusion.

What is to be done? It is true that our schools are a microcosm of the South African society as a whole. We have become increasingly violent as a nation.

Crime has been a presence in our communities for decades. Granted, crime in itself is an act of violence. But the violence that accompanies crime has reached a new intensity of late.

Sadly, it has clearly had a major psychological impact on our children. Our children are simply throwing the reality of a violent nation back into our faces. Our children are saying: this is what you, South Africa, look like. But we cannot afford to throw our hands in the air, in resignation.

In areas such as Westbury, the scene of countless violent gang activities, policemen have in the past been stationed outside schools, searching pupils for weapons and drugs as they enter school gates. It worked. There was a drastic reduction in the number of violent encounters on school premises.

It if can work in Westbury, one of the most violent townships in Johannesburg, it clearly can work anywhere in the country.

It is our responsibility as a nation to make the intervention. Our teachers and their pupils are under siege. This is a state of emergency.

We want justice for Kulani - uncle

Call that suspects not be tried as minors.
News
3 years ago
Next Article