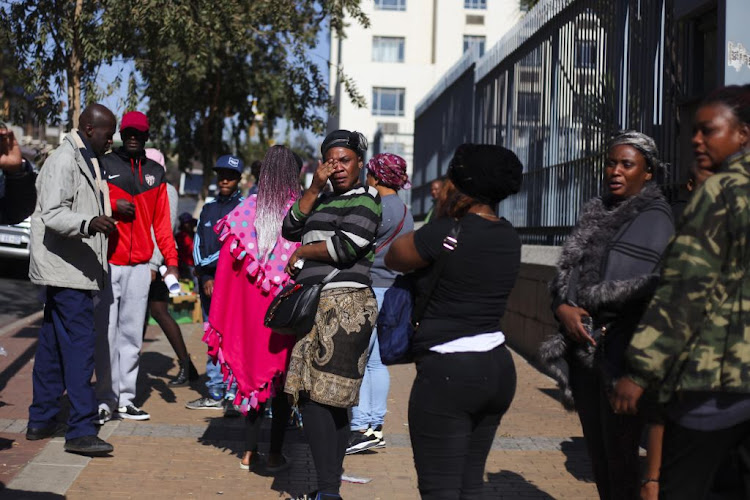 Family members of a Forest High School pupil who was stabbed to death are emotional as they leave the Johannesburg Magistrate's Court where his attacker made a first appearance on June 5 2019.
Image: Alaister Russell/The Sunday Times

The 20-year-old accused of murdering a pupil near the Forest High School in Johannesburg "came under attack" and was defending himself, his legal representative said in court on Thursday.

The pupil - named as Mohamed Mwela - was making his second appearance in the Johannesburg Magistrate's Court accused of murdering teenager Daniel Bakwela. He also faces two charges of attempted murder.

Dressed in navy boots, faded pants and a branded jacket, grade 11 pupil Mwela said he intended to plead not guilty, and said he was acting in self-defence.

In an application for bail, Mwela submitted a written affidavit, which was read by his attorney Mudi Mavhengani. He argued that it would not be in the interests of justice to be denied bail as he had been attacked by alleged "Stoutkinders" gang members, popularly known as the STKs.

"On the day in question, I had come under physical attack by the members of Stoutkinders gang, as they are called. The deceased [Bakwela] dropped a knife that he had in his hand. After I had beaten him with a stone, I then picked up the said knife … and stabbed one of the gang members, so that I can run for my life. These gang members chased me as I was running back to the school," read the affidavit.

The National Prosecuting Authority said it did not oppose bail as Mwela was not a flight risk.

The magistrate, BC Molwana, said he would not make a ruling following material defects in Mwela's affidavit, missing signatures in the prosecution's affidavit, and because he still had to read up on the school's policy on age limits and other legislation.

Despite being a registered school pupil, and in the process of writing mid-year exams, Mwela will be tried as an adult because of his age.

The bail application for Mohamed Mwela, the 20-year-old suspect who allegedly stabbed to death Daniel Bakwela, has been postponed until Monday.
News
2 years ago

"I am going to pronounce a judgment that is fair, without favour and fear. A judgment or ruling is not supposed to be popular. It doesn't mean everybody will be satisfied when the ruling is pronounced, but the pronouncement will done and it will be in the best interest that I pronounce this ruling not today [or] tomorrow. I can only pronounce it Monday," Molwana said.

Meanwhile, Bakwela's family also expressed disappointment at the possibility of Moela being granted bail and returning to Forest High.

The prosecution's proposed bail conditions include that Moela finds an alternative school and address, does not commit a similar offence, hands over his passport after his affidavit indicated that he had relatives outside the country and report to the Dobsonville police station weekly.

It is unclear whether Moela will return to his old school as he has not been suspended nor expelled, according to Gauteng education department spokesperson Steve Mabona.

He said it was only the head of department who had the powers to expel a pupil - but either way, an alternative plan would be made if Moela was expelled so that his right to education was not violated.

Moela returns to court on Monday for the ruling on his bail application.

A 20-year-old pupil who allegedly stabbed to death another pupil outside Forest High School in Turffontein could face 35 years in jail if the court ...
News
2 years ago

A mother's cry ripped through the silent neighbourhood of Turfontein in the south of Johannesburg after she had noticed the lifeless body of her son ...
News
2 years ago
Next Article