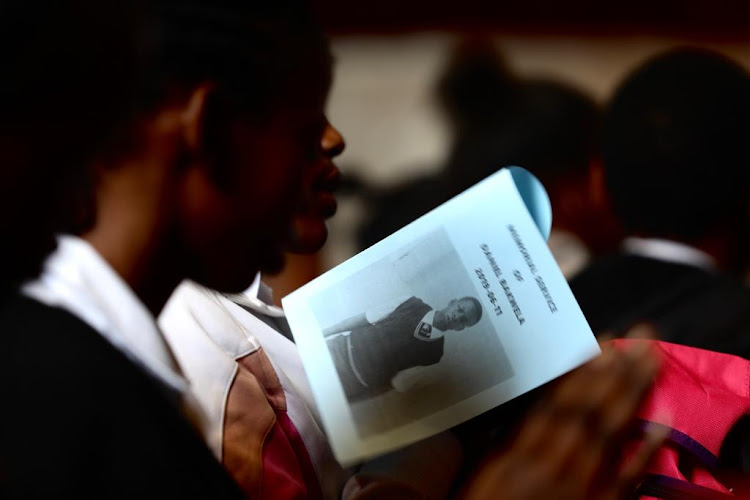 A Forest High School pupil holds a program at the memorial service of Daniel Bakwela who was allegedly stabbed and killed by a fellow pupil.
Image: Mduduzi Ndzingi

Parents must take responsibility for their children's behaviour.

This was the message by Nobuhle Mashinini, a Representative Council of Learners president, during the memorial service of Daniel Bakwela, 16 year old pupil who was allegedly stabbed to death by Mohamed Mwela.

"Parents you need to sit down with your child and teach them about what is wrong or right. The world is destroying the youth but our parents are doing nothing. There are several parent's meeting but parents don't show up. If parents were this concerned about us maybe such things could be avoided. Our parents have failed us," Mashinini said.

She pleaded with the parents to be part of their children's lives.

Maki Motapane, a member of School governing body (SGB) advised pupils to not associate with friends who did not add value in their lives.

"Bakwela was your friend and colleague and you know him better than his parents. However it is sad that today we are gathered here to bid farewell to him," said Motapane.

"It has become so common for parents to stand in front of an open grave bidding farewell to their kids. Parents have dreams for their kids."

The school principal Mark Peterson described Bakwela as someone who was always laughing.

"We are here to bid farewell to one of our own. We should remember him as he was and forget the ugly things said about him," Peterson.

Gauteng Education MEC Panyaza Lesufi said he had no words to comfort the family as he was also in pain.

"It's difficult to control my emotions, your pain is indeed our pain and loss. Our emotions are torn apart," Lesufi said.

He told the pupils that they should not seek to avenge Mabakwela's death.

School pupil Daniel Bakwela's life was celebrated at a memorial service arranged for him at Forest High School in Turffontein. Family, friends, students, staff and community members gathered to sing and cry while sharing sweet words and memories. Daniel was stabbed to death by fellow pupil Mohamed Mwela outside Forest High School on June 3 2019 in a suspected gang-related attack.

The 20-year-old accused of murdering a pupil near the Forest High School in Johannesburg "came under attack" and was defending himself, his legal ...
News
3 years ago

The 20-year-old pupil accused of stabbing his schoolmate to death has told the Johannesburg magistrate's court that he acted in self-defence.
News
3 years ago
Next Article