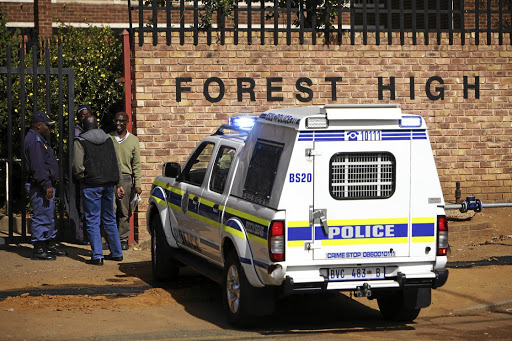 Police patrol outside Forest High School, South of Joburg, where a student was stabbed to death by another pupil. /Alaister Russell

School teachers cannot be expected to fix psychological and social problems in communities that lead to a spike in pupils being killed, harmed or turning to violent crimes.

The centre said some schools and communities were slowly being turned into war zones, in the wake of Monday's fatal stabbing of a pupil outside a school in Turffontein, south of Johannesburg.

The CSVR said urgent action was needed to tackle violence in schools, which it sees as a national emergency.

"Teachers are the first responders when violent crimes occur, but how well-equipped are they to spot early warning signs of violence, identify and flag a problem child, deal with crime and proffer sustainable solutions to crime prevention?" CSVR executive director Nomfundo Mogapi said.

The borders between schools and communities are porous, meaning interventions cannot be school-focused, because schools do not operate in isolation from the communities they are in, said the centre.

In many cases, the violence in schools mirrors that of the communities the pupils live in.

The 20-year-old pupil accused of stabbing his schoolmate to death has told the Johannesburg magistrate's court that he acted in self-defence.
News
2 years ago

CSVR called for an urgent review of laws and practices governing safety in schools, and the creation of a dedicated directorate to provide psychological and social support in dealing with youth crime.

"Government departments responsible for the welfare and safety of children regrettably work in silos and without enough capacity," Mogapi said.

"The communities themselves do not have capacity to identify a problem-child or tackle crime. For instance, a child who is expelled from one school for crime is often just transferred to another school without any counselling or rehabilitation. This does little to resolve the problem."

The centre recommended that interventions and programmes be launched to assist out-of-school youths and those who are at risk.

It said the breakdown of families within societies which creates a parenting vacuum also requires research.

"In many communities, social workers and clinicians acknowledge family structures are in a crisis and that there are many broken homes resulting in single-parent households," Mogapi said.

"That means for a single parent that goes to work there is very little time to supervise the children."

The bail application for Mohamed Mwela, the 20-year-old suspect who allegedly stabbed to death Daniel Bakwela, has been postponed until Monday.
News
2 years ago

The 20-year-old accused of murdering a pupil near the Forest High School in Johannesburg "came under attack" and was defending himself, his legal ...
News
2 years ago
Next Article