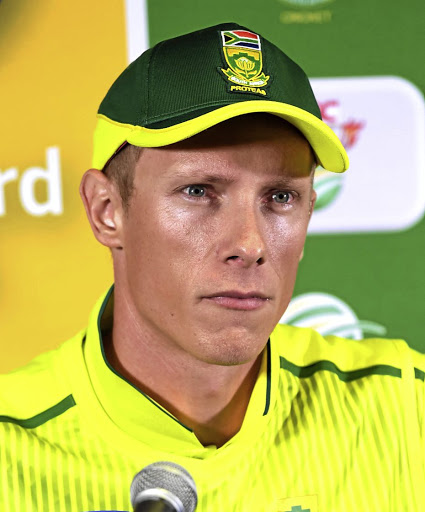 Replacing AB de Villiers would be a tall order for any player, but Rassie van der Dussen has made a fist of it at the World Cup.

He showed his class under a different kind of pressure in Cardiff yesterday when he was asked about the retired De Villiers' making a failed bid to return to the fold hours before South Africa announced their squad.

"I wasn't surprised that he would want to make a comeback on the world's biggest stage," Van der Dussen said.

"That's something the biggest players in sport have in common - they want to perform when the pressure's on and when the stage is at its biggest.

"I'm quite happy to be mentioned in the same sentence as AB. He's one of the best there's ever been.

"Do I have to replace him? I don't feel I have to. Can I play match-winning innings for my country? I believe I can.

"It didn't have as big an effect as I think people would like to believe it did."

Days after it emerged that AB de Villiers wanted to play in the World Cup‚ the story continues to dog South Africa’s campaign.
Sport
2 years ago

De Villiers quit the international arena in May last year and was told that, if he wanted to return and play in the World Cup, he would have to feature in South Africa's series against Pakistan and Sri Lanka in January and March.

Instead, he decided to play in concurrent T20 leagues in Bangladesh and Pakistan.

During the early stages of this year's Indian Premier League, which started on March 23, De Villiers floated the possibility of a return - even though by then he had made himself ineligible for selection.

Hours before the squad was announced, on May 18, he again raised the issue.

At that point selection convenor Linda Zondi ended the debate because De Villiers had not played against Pakistan and Sri Lanka.

Van der Dussen agreed that the selectors would have set a dangerous precedent by backtracking and picking De Villiers regardless.

"It's not necessarily the best question to be asked of me because I'm involved, and had he not retired it definitely would have influenced me directly," Van der Dussen said.

"But you can't on the day before the announcement of a squad that has been worked towards for longer than a year come and say, 'I want to make a comeback'.

"It would've set a difficult precedent."

OPINION: Coulda‚ woulda‚ shoulda: what AB must do now

What would AB do? The question would have been asked with growing frequency as South Africa shambled from one loss‚ to another‚ to still another at ...
Sport
2 years ago
Next Article