We want justice for Kulani - uncle 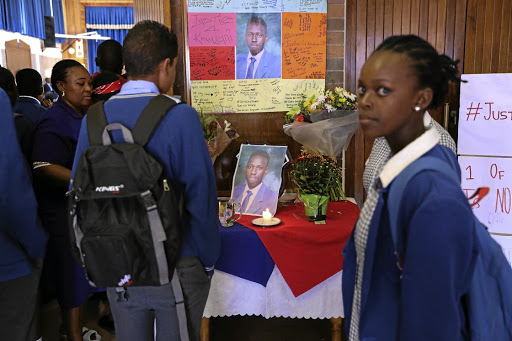 A routine Wednesday morning quickly turned into a nightmare for the uncle of slain
19-year-old Kulani Mathebula, when frantic call from his sister broke the tragic news.

Mikhongelo Chauke said he got the call from his sister Dumi Chauke, the mother of the Mondeor High School pupil, who said his nephew had been fatally stabbed in a botched robbery.

Chauke spoke out at the teen's memorial service at Mondeor High School hall on Friday. Kulani's brazen robbery and death dominated headlines this week when it also transpired that other schoolchildren were involved in his killing.

Chauke bemoaned the indignity the family went through after his nephew's body was left in the sun for hours.

He said he was responsible for Kulani and lived with him because his home is closer to the school. "I was devastated. It's a repulsive act," he told Sunday World.

Kulani's body was found on the roadside by a passerby, Rakesh Dhevalall, about a kilometre from his school.

Dhevalall told mourners that on the fateful morning two cars had passed the teen before he stopped to help him.

"I thought that he was having a fit and I should help," he said.

"I tried to comfort him, but all I could do was to pray for him."

A white cross has been erected at the park, surrounded by flowers, where Kulani died.

Three suspects, including a 13-year-old allegedly involved in the murder, were arrested by the police within 48 hours and Chauke said he found solace in the apprehension.

"I am just hoping that justice is going to prevail, " he said.

Chauke said murderers should not be tried as minors for their heinous crimes .

Kulani's best friend, Amukelani Mthembi, recalled how his friend helped to boost his self-esteem during his worst schooling year.

National Prosecuting Authority spokesperson Phindi Mjonondwane confirmed that the three suspects had been released into the custody of their parents.

Kulani will be laid to rest in Malamulele, Limpopo, today.