Cyril Ramaphosa needs to be president and lead on policy certainty 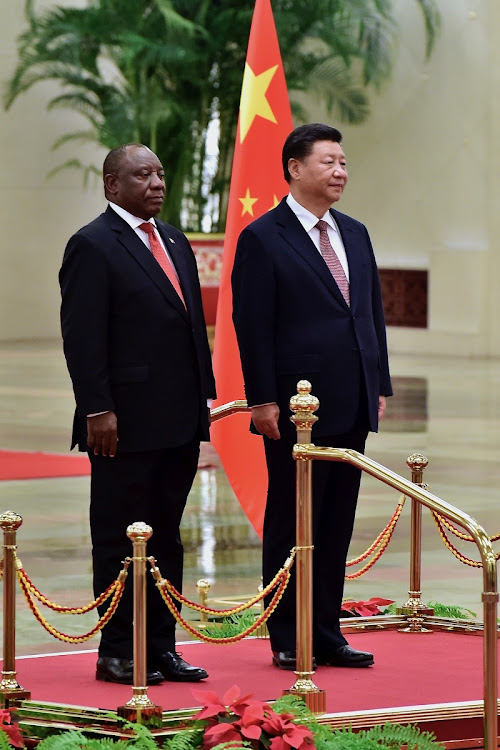 President Cyril Ramaphosa with President Xi Jinping of China during a Welcome Ceremony at the Great Hall of the People in China.
Image: GCIS

President Cyril Ramaphosa's supporters would have us believe that he is SA's own Deng Xiaoping - the man credited for the economic reforms that transformed China into the industrial powerhouse it is today.

In the days leading up to last month's general election, for instance, the ANC's economic transformation committee chairman and key Ramaphosa campaigner Enoch Godongwana, penned a piece in Business Day drawing parallels between the president's New Deal and Deng's "Four Modernisations Goals for China" which helped pull the Asian giant out of the economic stagnation during the last years of Mao Tsetung's Cultural Revolution and Great Leap Forward.

Ramaphosa himself has not hidden his interest in Deng and how he brought about economic reforms in the communist-ruled country.

He told editors soon after becoming president last year that he was reading Ezra F Vogel's voluminous Deng Xiaoping and The Transformation of China.

As he prepares to deliver his first State of the Nation Address under the new administration, many would be listening closely hoping for a Deng-era-like massive shake-up, especially on the economic front.

But Ramaphosa is no Deng and SA is no China.

A panel, setup to tackle the emotive issue of land reform, on Tuesday has concluded its work and handed over its final report to President Cyril ...
News
2 years ago

It is true that, in many ways, Ramaphosa finds himself today in a similar situation Deng was in when he became China's most powerful leader in 1978.

Like the Chinese economy of the time, ours is floundering - unable to create enough jobs to absorb new entrants into the labour market and failing to reduce the inequality gap, especially between blacks and white.

Major state-owned enterprises are in serious financial trouble, largely because of mismanagement and corruption that became the norm during the state-capture era.

As was the case in China following the Mao era, public trust in the political system is at an all-time low with large numbers of citizens associating the ANC with corruption and misgoverning.

Deng is credited with major economic reforms that "opened up" the Chinese economy, attracting foreign investment while allowing privately owned companies in a number of sectors.

He was able to do so largely because he had taken full control of the all-powerful Chinese Communist Party and ensured that its higher echelons were dominated by reformists who shared his vision for modernisation and change.

His rise to power was not smooth and by the time he became the most powerful figure in the party, there were still pro-Mao elements pushing back against change.

Ramaphosa's wasn't either and, almost on a daily basis, we are seeing evidence which suggests that his fiercest opposition is not in the red overalls or the suits running the DA, but at Luthuli House.

Granted, Deng and Ramaphosa operated under two very different political system - one authoritarian and the other, a democracy.

But the principle is that unless the leader has full control of his party, he is unlikely to succeed with fundamental economic reforms at government levels.

Recent developments suggest that, while he is now firmly in charge of the executive, Ramaphosa does not appreciate the strategic importance of having control over Luthuli House.

He has taken all his key full-time lieutenants - the likes of Zizi Kodwa, Senzo Mchunu and even Fikile Mbalula - and given them government posts, leaving the ANC headquarters as the uncontested centre of power for secretary-general Ace Magashule and others who consider themselves proponents of a "radical economic transformation" platform opposed to the "market-friendly" New Deal.

Last week's furore over the ANC's position on what needs to be done with the South African Reserve Bank as well as monetary instruments the state plans to use to bring about economic growth should be seen in this perspective.

The party is not speaking in one voice because its president's authority on policy issues is not unchallenged within the party.

The ANC has set an ambitious target for President Cyril Ramaphosa's government: halve the unemployment rate from 27% to 14% in the next five years.
News
2 years ago

So as Ramaphosa outlines the government's programme and priorities for the first year of his new administration, there would be lingering doubts whether future bickering between Luthuli House and Pretoria would not result in a policy paralysis.

In the context of the apparent disharmony between the party president and the secretary-general, it may help Ramaphosa to redeploy at least one of the former senior ministers who have now resigned from parliament after not making it into his new cabinet to Luthuli House.

The political seniority of a Baleka Mbete, or a Jeff Radebe, makes it possible for them - if at the party headquarters - to call the spokespeople at Luthuli House to order if they are about to issue a statement not in line with party policy.

But above all of this, the president himself has to be clear about the line of march going forward. He may be part of a collective, but he is the president and it is his job to show leadership.

As it is often said, what the markets and investors appreciate the most is policy certainty.

President Cyril Ramaphosa was elected on the promise of bringing a “new dawn” to the country.
News
2 years ago

President Cyril Ramaphosa should be congratulated for heeding the call for him to speak out and stop the confusion caused by his ANC comrades over ...
Opinion
2 years ago
Next Article