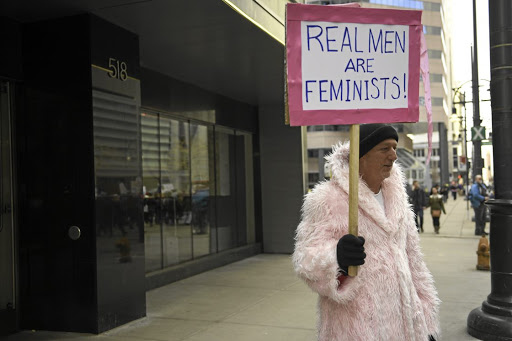 The writer says men should support and advocate for a human world where one's sex would not be a determinant of one's ability to do something.
Image: Joe Amon/ The Denver Post via Getty Images

I have struggled with the question: can men be feminists? Is it really possible for men to understand what feminism is all about?

I ask this question because feminism conjures up different things for different people. There was a time in my life when I called myself a feminist, [but] I was chastised by my fellow male gender activists, that it was not only insensitive but by doing so I was also regressing the work of feminists.

In the process I was entrenching patriarchy and its ugly and toxic consequences, to the detriment of women. I became conscious of the privileges that I as a man have, and we sometimes as men are deliberately oblivious to these privileges.

Today, I continue to do this psychologically and emotionally excruciating, introspection journey of trying to find out where I fit in the feminist discourse. Where does a man who is for the full expression of women's' rights locate himself, if at all there is a place for him. There are no easy answers.

Chimamanda Ngozi Adichie, in her book We Should All Be Feminists, narrates this about an interaction she had with her brother. Her brother said to her that people were saying Purple Hibiscus, a book she wrote in 2003, was feminist.

He went on to advise Chimamanda that she should never call herself a feminist since feminists are "women who are unhappy because they can't find husbands". In response, Chimamanda decided to call herself a happy feminist.

This was not the only contention to her feminism. A Nigerian academic, once told her it is unAfrican of her to uphold feminist ideals, and that she holds these ideals solely because she was influenced by western books.

Chimamanda goes on to say "the word feminist is so heavy with baggage, negative baggage - you hate men, you hate bras, you hate African culture, you think women should always be in charge, you don't wear make-up, you don't shave, you are always angry, you don't have a sense of humour, you don't use deodorant".

The little finger he wagged at EFF MP Ndlozi is a sign he's well-endowed, which does not define a 'real man'
Opinion
2 years ago

I am convinced that a lot of us men at some stage have thought this about feminism and women who call themselves feminists. The majority of us probably believe in all of these negative baggage about feminist women.

I am convinced that it is not easy for us men to interrogate and confront our privileged position because that would force us to admit that we are beneficiaries of a patriarchal system, which is a hard pill to swallow.

In the same way that most white people in our country would not acknowledge their privilege, and that it came as a consequent of apartheid, many white people will claim that what they have was due to hard work - forgetting that their privilege is largely due to the fact that their skin colour was what allowed them to access opportunities that gave them these privileges. The same can be said about us men, it does not come easy for us to accept that being male is sometimes the only standard necessary for us to access certain privileges in society.

It is our maleness that continues to open doors for us, sometimes unfairly so. Accepting this is a hard, bitter pill to swallow. So, I am convinced that we cannot be feminists as men, but we can, we must, we should be pro-feminists and allies in the total liberation of women from the shackles of patriarchy.

Opening up, not giving up on being different

Hateful depictions of lesbians and gays passed on from parents to kids.
Opinion
2 years ago

Doing so means that we embrace, support and advocate for a human world where one's sex would not be a determinant of one's ability to be anything and everything. Feminism should not be a threat to us men.

Dr Yandisa Sikweyiya, a specialist scientist at the Gender and Health Research unit at the SA Medical Research Council, says this about pro-feminist men: "My view is that men who involve themselves in feminist movements and struggles for gender equality should see themselves as allies of feminists (women), as such I conquer with the view that such men should be viewed as pro-feminist men rather than feminist."

According to him "pro-feminist men's involvement in feminist movements and struggles should be informed by genuine respect for women and for them to always exhibit consciousness regarding women's capability to engage and lead this struggles on their own".

Sikweyiya is an instrumental resource that we can use as a reference on where to locate ourselves in the feminist discourse. We can only be allies.