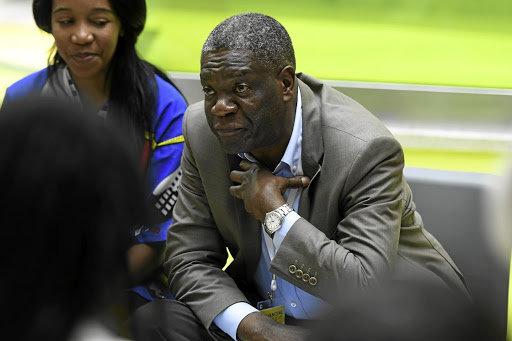 Dr Denis Mukwege, who has put his life on the line to help victims of sexual violence in strife-torn eastern DR Congo, is an example of what men can do to help women in distress.
Image: Victor Boyko/Getty Images

Congratulations to Dr Denis Mukwege who recently won the Nobel Peace Prize for his work in the Democratic Republic of Congo, who has dedicated his entire life to helping women and girls who have been sexually abused and raped.

Mukwege is a world renowned gynaecological surgeon who is the founder and medical director of Panzi Hospital in Bukavu, in strife-torn eastern DRC.

The hospital does not only treat survivors of physical wounds but it also provides legal, psycho-social and socio-economic support to its patients. It is a one-stop hospital providing holistic medical care to survivors of rape and other patients in need of medical care.

The hospital serves more than 3 500 women a year. One of Mukwege's colleagues, who is also a medical doctor, says: "[Mukwege] is fair but tough, and always strives for internationally-recognised standards."

The Nobel committee chair Berit Reiss-Andersen described Mukwege as a "unifying symbol both nationally and internationally" in the struggle to end sexual violence in armed conflict.

I write about him cognisant of the fact that he is not an ordinary medic but a conscious and justice driven gynaecologist.

He is an embodiment of what justice is all about. And this surely makes him an extraordinary human being.

It has not been easy for him to operate in an environment of war, where his own life has been at risk. He has been attacked, vilified and condemned for speaking out against rape being used as a weapon of war.

In October 2012 his family were held at gunpoint at their home. Coming from work, he unknowingly drove into the raid. But the attackers were distracted by his aide, who took the bullet, giving Mukwege a chance to duck out of danger in the dark of the night.

In Mukwege we have a man who has dedicated his entire life to ensuring that sexual violence does not silence its victims. The ongoing rape trial of a sadistic, cruel and narcissistic Tim Omotoso may make us despair, despondent and discouraged.

But in Mukwege we have a clear example that all is not lost, that there are men who will not look the other way but become voices for the voiceless, despite any risk.

He went on to describe rape as a "cheap and efficient form of terror which condemns its victims to a life sentence".

Mukwege is an example of why we should not give up on men. We should avoid the unnecessary giving up on men narrative, as it paralyses all of us into inaction.

There is a possibility of men being allies in the struggle to end sexual violence and rape in the world. This possibility is not a pipe dream neither is it far fetched.

I write as an internal optimist about the efficacy of engaging men and boys in stopping rape and sexual violence. As men there is a lot in it for us when we do not fold our arms but instead roll up our sleeves and work tirelessly in ensuring that rape is dealt with decisively, we can be a force for good.

We need to replicate millions of Mukwege's in our lifetime. I hope that the millions of boys who read and watch horrifying stories of rape every day, will in fact realise that rape should not define who we are as men. We should not stop at just being disgusted, without us doing something about it as Dr Mukwege has done.

I know there are men and women in our health services who go out of their way ensuring that survivors of rape are not treated as just numbers but as human beings with dignity.

Hats off to a courageous, brave man who I think his actions clearly demonstrates that all is not lost.

He is my hero, I love men and I am not about to give up on all of us.