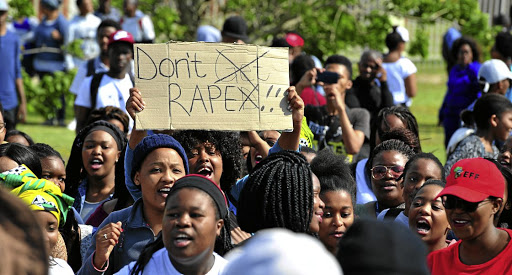 University students protest against rape. Violence against women is on the rise in our country while stereotype are perpetuated by ill-constructed messaging.
Image: Lulama Zenzile/Gallo Images

A few years ago Charlize Theron had an advert that says real men don't rape. I found this advert extremely problematic, unimaginative uninspiring and sadly misleading.

It presupposes that there is a template of a good man and statistics show us that most of us men have a propensity to rape, to violate, to kill, to steal and sexually harass those that are less powerful than us.

The concept that real men don't rape is misleading in the sense that it creates a false dichotomy that there are those men who by merely looking at them can see that they rape, steal and murder; and there are those because of the type of work they do, where they stay and the company they keep would not countenance doing any of those things. This is false.

Such adverts fit in the stereotype that certain men should be looked at in a manner and be automatic suspects whereas others would not even be thought of being potential rapists and murderers.

We all know of uncles who family members trusted yet they have gone ahead to abuse the trust.

What about the clergy who society regards as representatives of God but they've gone on to sexually violate young boys and girls who trusted them and believed in them.

We all know of the sex scandals in the Roman Catholic Church, the Anglican Church and recent examples of sexual abuse in which pastors in charismatic churches stand accused of such criminal deeds.

Unfortunately, the toxic values inculcated in both boys and girls from a young age are implanted by women
Opinion
3 years ago

So, are these men not real men? Surely the answer is that you can't tell by looks and conclude that a man will not abuse, rape or violate others one way or the other.

So, this advert has in fact taken us back to the dark ages in that there are those who believe in its message when we know that violence against women is pervasive insidious and a pandemic in our country, which means we can't afford the luxury of believing in such nonsensical campaigns such as "real men don't rape".

I am convinced that the agency employed had not done its thorough scholarly scientific work to establish the efficacy of such an advert. If it did, it would have discovered that the rate of violence in our country is such that all of us men have a responsibility to be each other's keeper.

The sad reality about this advert is that there are a lot of people who continue to use it without unpacking the message that it sends to men in general. I have heard a man saying to me "look real men don't rape, real men take charge" when I asked him what does this mean to him as a man, he said: "The violence that we see is not a true reflection of real men in our country but is in fact a creation of this media to sell newspapers."

He went on to say that "the picture painted of South African men is in fact the opposite because there are a lot of us real men who buy food for their kids, who pay school fees, who pay their bonds diligently and have never raised their hands to their partners".

In turn he asked me: "Where do they get these statistics that suggest that we are the capital of violence and rape in the world? All they seek to do is to demonise us."

Do you now see the power and potency of adverts? If adverts are not properly researched, such ignorance can be the unintended results.

It can create a false sense of complacency which unfortunately makes the receiver not to take appro-priate action because he fervently believes in the message that the advert seeks to convey.

"Real men don't rape" is an anathema to the worthy cause of creating a society where men would take responsibility about violence in their homes, in the workplace and in society in general.

I hope advertising agencies in our country would be alive to the pervasiveness of violence against women and whenever they are being approached to make an advert they would create one that would assist in creating a conscious man who would be able to identify with the call that no violence will be perpetrated in my name.