Mxolisi Zondi should be lauded for standing by his daughter 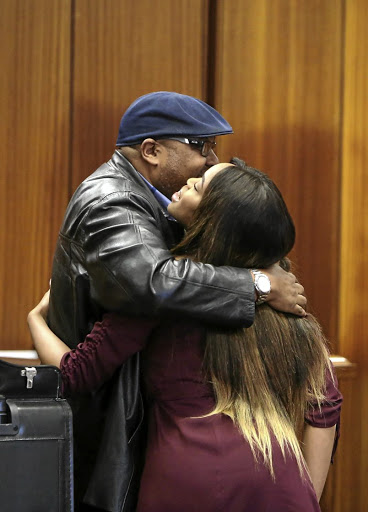 Cheryl Zondi with her father Mxolisi Zondi in court during her testimony against pastor Timothy Omotoso in the PE high court.
Image: Werner Hills

Our former first lady Mama Zanele Mbeki always says the following: "The enemy of feminism is not male, it's patriarchy and patriarchy is not male."

You may probably not know who Zondi is, he is the father to Cheryl Zondi - the stoic, intellectually stubborn young woman who stood up and faced patriarchy and its ugly toxic consequences in the eye in the rape trial against pastor Timothy Omotoso. Zondi went to court to surprise and support his daughter during an emotionally excruciating period in her life.

I am writing to appreciate an unconventional man whose actions are an act of an ordinary loving, caring and compassionate father.

It is rare to find a father who will not find fault with his daughter for speaking out against patriarchy.

It is also commendable to single out such a rare breed of a man. I am convinced that it must not have been easy for Zondi to stand side by side with his daughter in the face of an onslaught that sought to denigrate and delegitimise his daughter. I think this man is an unsung hero in that he did not for one moment blame his daughter for being violated.

It is unusual to find a father who will embrace, love and above all physically be present to affirm the correctness of his daughter's action in taking on misogyny head on. I admire this man for standing up and giving us a lesson of what it is to support one's daughter in a very difficult situation.

Rape has nothing to do with sex, it's about power, it's about control, it's about domination and it's about humiliation; and Zondi says he will not keep quiet and be part of those who seek to shame you, ostracise you and make you a devil incarnate.

Zondi says to his daughter Cheryl and the millions of young women who are sexually violated daily, I support your agency and you standing up and re-appropriating your power and finding your voice. Zondi, thank you so much for being there when your daughter needed you the most.

There are those who will ask: "Why do you congratulate a fish for swimming?" I think they don't understand what it means to be supported by one's father in a world where a father's absence is the norm.

Judge Mandela Makaula has dismissed an application by Timothy Omotoso’s defence counsel‚ Peter Daubermann‚ to recuse himself from the case.
News
2 years ago

A lot of us would ordinarily have expected Cheryl's mother to be in the forefront of supporting her daughter because our society has what I call social scripts which says that emotional support, being there for one's children, is best when left to mothers.

Zondi puts shame to such a script and his actions are saying to all of us that we can change this script because it is a toxic script that all of us should shun. I am humbled by not only his determination to undo the patriarchal script but his determination in creating a different world.

It is indeed possible to undermine patriarchy in a more practical, proactive manner as Zondi has done in ensuring his daughter will not walk alone. Our involvement in our children's life should never be confined to materialism only but we should, as fathers, walk that extra mile in visibly supporting our daughters when their rights are violated.

We have a responsibility as fathers to raise our voice and say loudly and proudly that young girls will not be violated in our name. Doing otherwise would be spitting at the graves of those gallant women of 1956 who laid down their lives for our freedom.

Baba Zondi, you are my hero, and the millions of men who are silently saying "no to rape" will be committed in our name. Thank you for your unwavering, stoic support to Cheryl as she says: "I will not keep quiet to the powerful who abuse, misuses and put shame to the word of God."

For rape survivors, retelling their story in court can be daunting and "horrifying" - and sometimes even worse than the experience itself.
News
2 years ago
Next Article