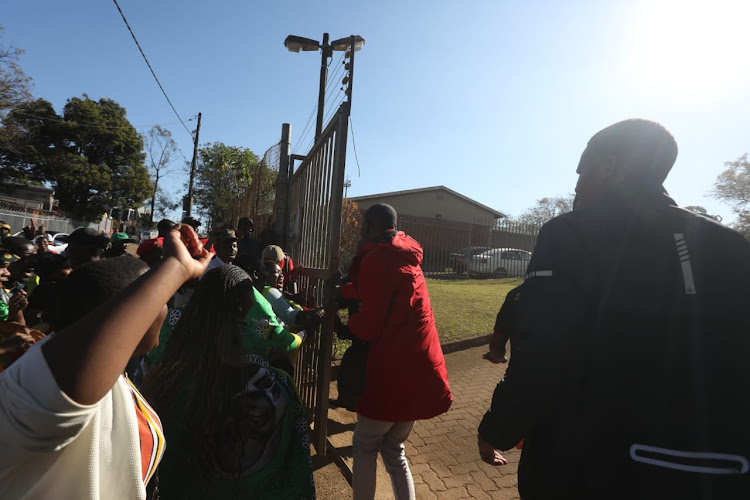 Community members in Ndwedwe demonstrate outside the magistrate's court on Friday morning, where a man suspected of stabbing a pupil at her school made a second appearance.
Image: Sandile Ndlovu

Chaos erupted on Friday outside the Ndwedwe magistrate’s court, where community members tried to block the police van transporting a man accused of stabbing a pupil to death at her school last month.

Phindile Gcwensa, 19, was attacked allegedly by Nduduzo Mpanza, 23, in front of her schoolmates at Nqakathela Secondary School in Ndwedwe, KwaZulu-Natal, on May 5.

Earlier that day, Gcwensa spotted Mpanza during the school break and remained on the school premises fearing for her life. Later that afternoon, Mpanza allegedly sneaked in and stabbed her with a knife.

Speaking to TimesLIVE outside the court, Phindile's uncle Thami Gcwensa said he was outraged the incident happened on the school premises.

Gcwensa said Phindile had been in a relationship with Mpanza and it had ended.

Mpanza first appeared in court on May 16 when he abandoned his bail application, fearing the community would take the law into their own hands.

The teenager accused of killing a King Edward VII pupil outside a Sandton club will be sleeping in jail another night after his lawyer failed to show ...
News
6 months ago

On Friday, he appeared for the second time where magistrate Gladys Luvuno postponed the case until July 27 as she awaits for a police docket. Mpanza will remain in custody until the next court date.

Mandisa Zondi, a community leader, said Gcwensa was an orphan with a good academic background.

He said the community was not happy with how the case had been handled by police and the school.

Xolani Skade, an ANC leader in the community, said security must be beefed up at schools to protect pupils.

Provincial education department spokesperson Muzi Mahlambi said schools are a safe place as weapons are not allowed inside the premises.

“In schools we are not supposed to have security officers as it is a learning environment. It should be a place where a community also partakes in the safety of children,” he said.

“We condemn what happened at Ndwedwe. As the department, we will let the law takes its course.”