Sadtu and Motshekga at daggers drawn over rewrite of leaked papers

The department of basic education says it will defend any attempt in court by the SA Democratic Teacher's Union (Sadtu) to halt the rewriting of leaked matric exam papers.

The union said in a sternly-worded statement on Saturday that it was considering legal action against the department and Umalusi — the examinations quality assurer — over a decision to have all pupils who wrote the national senior certificate mathematics and physical science papers rewrite them because the question papers were leaked. 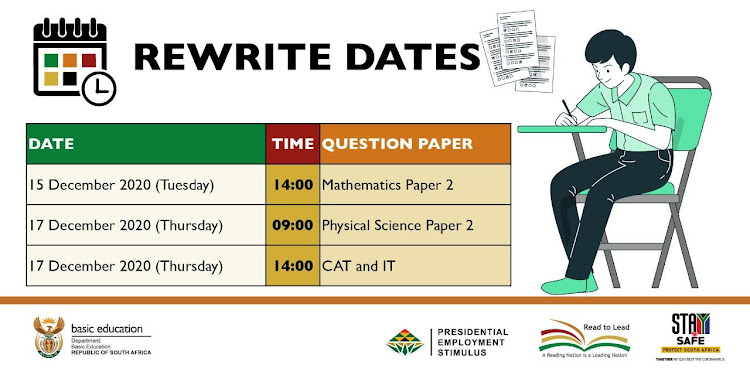 The department had consulted with unions and “the majority of unions made their views known that they were against the decision and consensus was reached. However, Umalusi did not agree and the decision to rewrite was taken.”

The union said the department had jumped the gun.

“Sadtu believes the decision to have all learners doing mathematics and physical science rewrites is unfair and premature because the investigation [into the leaks] has not been concluded,” said Sadtu.

“Based on the initial investigation which has shown that the number of learners who may have seen the paper are less than 200 out of the 390,000 who wrote the paper, there is no basis for a national rewrite.

“Preparing for the 2020 matric examinations was not easy under the Covid-19 conditions and the learners’ mental health and readiness for rewrite is a big issue.”

Matric maths and science papers to be rewritten

The matric mathematics paper 2 and physical sciences paper 2 are to be rewritten across SA.
News
1 year ago

Mugwena Maluleke, the union’s general secretary, said the “decision has left many learners and teachers distraught and frustrated. It undermines the work of our teachers and learners who worked under difficult circumstances due to Covid-19. Learners are being punished for something that is not of their making as only a few saw the paper.”

Spokesperson for the department Elijah Mhlanga told TimesLIVE on Sunday that the department would not take the threat of a legal challenge lying down.

“First, it is their prerogative to seek any relief they believe is necessary,” said Mhlanga.

“Second, the department will wait for the matter to get to court upon which it will be defended. Until the court papers are received it remains unclear what case they intend to make in court.

“As things stand the rewrite is taking place as announced by the minister on Friday.”