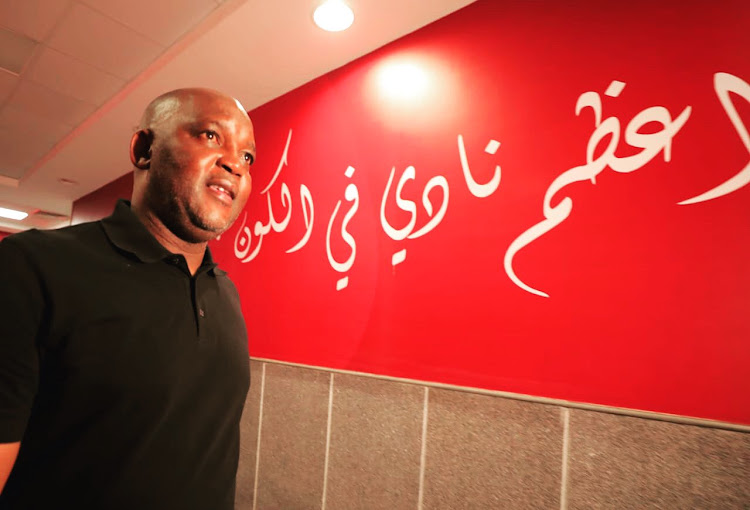 Al Ahly coach Pitso Mosimane has lifted a third trophy in the space of his first two months at the club as the Red Devils wrapped up a treble - so far - in 2019-20 with Saturday night's penalties Egyptian Cup victory against El Gaish.

For Mosimane‚ this completes a dream first two months at Ahly since his bombshell move there from Mamelodi Sundowns in early October.

In case you are awake and still celebrating.. Watch & enjoy 🤩🔥#TrebleChampions pic.twitter.com/pjE8tbzEZh

Africa's Club of the 20th Century had already secured the Egyptian Premier League title under Swiss predecessor Rene Weiler‚ which Mosimane wrapped up in style with a draw and three victories.

Ahly beat bitter Cairo rivals Zamalek 2-1 in the final to lift their first Caf Champions league title since 2013 - extending their record to nine tournament victories - after Mosimane had steered the Devils through the semifinals with a 5-1 aggregate win against Wydad Casablanca.

Saturday night's win against El Gaish saw the Egyptian Cup added. And Ahly can make it a spectacular quadruple in 2019-20 if they beat Confederation Cup victors RS Berkane of Morocco in Thursday's Caf Super Cup at Cairo International Stadium.

Mosimane can take plenty of credit for Ahly's Egyptian Cup trophy‚ as he steered the club past Abou Qir Fertilizers and Al Ittihad in the quarter and semifinals (both 2-1).

Should Ahly beat Berkane‚ Mosimane would surely be on the verge of some sort of world record.

Due to the effects of Covid-19 on global domestic schedules‚ the South Africa 2019-20 season - where Mosimane steered Sundowns to a treble of the Absa Premiership‚ Telkom Knockout and Nedbank Cup - ended three months earlier than in Egypt.

So Mosimane has already accumulated six winners' medals and trophies in 2019-20‚ and the Caf Super Cup would make it seven.