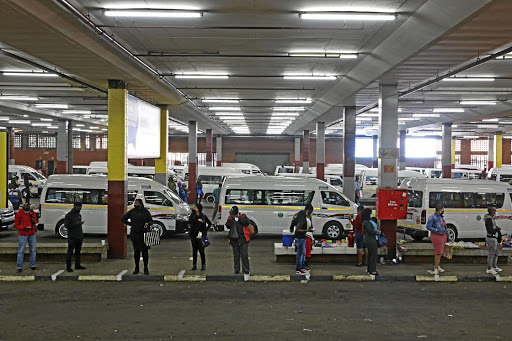 Bree Taxi Rank in Joburg during the lockdown . /Thapelo Morebudi

Transport minister Fikile Mbalula has threatened to refer a decision by some Gauteng taxi operators to hike fares by over 100% to the Competition Commission.

This means a single trip from Johannesburg to Alexandra, which currently costs R13, will be R30, a 130.7% surge. The new fares start on June 15.

Mbalula yesterday said he was aware of the problems and urged taxi associations to be mindful of the poor when re-determining fares, especially in light of the financial relief that the government was finalising to assist the industry.

Mbalula said current regulations prevented illegal profiteering, as a result, he was enjoined by the regulations to refer the matter to the Competition Commission to assess if the fare increases were fair and justifiable.

'Siblings left nothing'
News
2 years ago

"We understand that there may be a need for fare increases but those increases must be fair. The industry must take into consideration the plight of the poor and the working class, who form the majority of their customers. Anything outside of that fairness is illegality," said Mbalula.

Gabriel Mataboge, general secretary of ATA, defended the decision to increase the fares. "Government requested us to fill only up to 70% capacity of our vehicles. Government also restricted our working hours in levels 4 and 5. As an industry we lost a lot of money. Through the media, government indicated that it has plans to help us as an industry but that has not materialised. Our members are really struggling. Taxis are being repossessed and insurance companies want their money. We felt that we need to raise the taxi fares to recover the losses we have incurred due to Covid-19," Mataboge said.

He explained that a normal Toyota Quantum which brings home R800 after fuel refill daily, now brings R150 to R200.

Thousands of Mamelodi commuters are increasingly getting desperate for transport to work and back home amid a dispute which has seen taximen down ...
News
2 years ago

To enable everyone to make a living, taxis reduced the number of vehicles operating in any given day. Taxis, Mataboge said, now operate three times a week.

"With these losses we still have to pay drivers and the banks. Banks are threatening to take the vehicles, others have started to do so," he said.

SA National Taxi Council chief strategist Bafana Magagula said they did not advise associations in the country to increase their fares randomly, but to always consider increasing fares during the months of June and July each year.

A commuter said: "This will make life difficult for us. If one spends R30 in a single trip, how much will one spend in a month?"