'You better have a receipt to prove your cigarettes weren't stolen or bought illegally': Cele 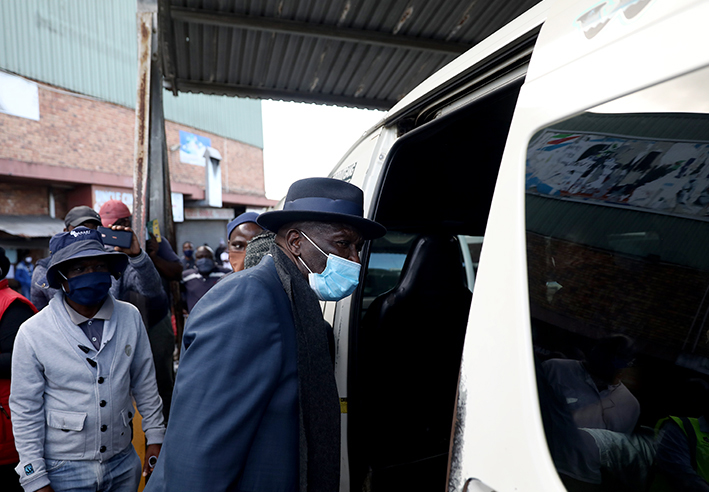 Police minister Bheki Cele during an operation at Stanger, a part of Ilembe District which is now becoming a hotspot for Covid-19.
Image: SANDILE NDLOVU

Police minister Bheki Cele has explained that people carrying cigarettes will have to produce receipts for them.

“If  you are having it in your pocket whether in  large or small quantities we would like to see the evidence of where you got it,” he said on Saturday.

Cele said police had the right to ask people for a receipt and that this was done to ensure the cigarettes were not purchased illegally or stolen.

The minister was speaking at a taxi rank in KwaDukuza, north of Durban. He and KwaZulu-Natal premier Sihle Zikalala, with health MEC Nomagugu Simelane-Zulu and transport MEC Bheki Ntuli, conducted walkabouts and roadblocks in the iLembe district, a Covid-19 hotspot.

With the sale of alcohol resuming on Monday, Cele reiterated that he did not hate alcohol but was concerned about its effects  on crime and the health system.

“I don't hate alcohol, I don't care about alcohol. What I care about is that people who take alcohol sometimes become very inconsiderate," he said.

"We are worried on two fronts: firstly, the crime and the health side. After alcohol [sales resume], watch the space, they will begin to shoot each other, butcher one another and stab one another and those people will go occupy very serious spaces of the health sector like theatres and trauma centres, and people that are sick with Covid-19 and ordinary illnesses won't get space.”

Cele warned that those who do not follow the regulations when it comes to  selling alcohol could lose their liquor licences.

"We have to the best of our ability tried to cooperate and be responsive to all the concerns of government," but trust has been broken.
News
1 year ago

“We are making the call that they will need to read the regulations very closely. The regulations are very clear. We will be there, we will be very strict. The department of police, tourism and small business will be patrolling and whoever breaks these rules will possibly lose their licence,” he said.

Alcohol will be sold between 9am and 5pm from Monday to Thursday. Cele said those who made online purchases would need to make sure the alcohol was delivered during the specified times.

Meanwhile, Simelane-Zulu said the provincial department of health had adapted its strategy to dealing with Covid-19 in the district.

“Two weeks ago we started implementing programmes with the district leadership and the health leadership at a provincial level. One of the things that we decided to do was to add and augment the tracer team in the area so that when there is someone who tests positive we're able to pick that person up quickly,” said Simelane-Zulu.

Simelane-Zulu also said that they had committed to ensuring that the contacts of someone who tested positive were picked up within 12 hours.

Before heading to KwaDukuza, a roadblock was conducted at uMvoti Toll Plaza where, according to Cele, 56 motorists were arrested, most of them for travelling without a permit.

EFF leader Julius Malema has thrown his weight behind Cogta minister Nkosazana Dlamini-Zuma on her stance against the sale of cigarettes and tobacco ...
News
1 year ago

Lift cigarette ban or we go to court: AfriForum

AfriForum has written to the ministry of cooperative governance and traditional affairs, warning that it will go to court if the government doesn't ...
News
1 year ago

British American Tobacco SA said on Friday it will start urgent legal proceedings to challenge government's decision to extend the ban on tobacco ...
News
1 year ago
Next Article