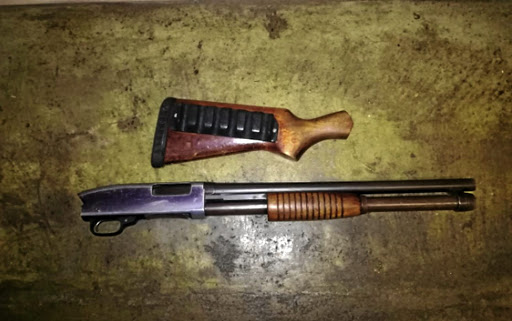 A police shotgun was broken in a scuffle between an officer and a man who was resisting arrest./Supplied

A law-enforcement officer's shotgun was "broken in two" during a scuffle with a taxi driver who tried to grab the weapon after being arrested at Joe Slovo Park, the scene of ongoing protests in Cape Town.

Cape Town law-enforcement spokesperson Wayne Dyason said the incident happened on Sunday when the 22-year-old taxi driver was pulled over and allegedly attacked an officer.

"When the officers questioned him he began to assault the officer," said Dyason.

KwaZulu-Natal police are investigating a case of culpable homicide after a police officer was killed in a car accident.
News
2 years ago

Two police officers were killed when they were hit by a suspected drunk driver at a Covid-19 roadblock on the R594 in the Free State on Friday night.
News
2 years ago

"He made an attempt to wrestle the officer's shotgun from him and the officer, with the assistance of his colleagues, managed to overpower the suspect. The shotgun was broken in two during the scuffle," said Dyason.

He said the incident could have ended with serious consequences.

"The suspect was arrested for attempted firearm robbery, assault and resisting arrest."

Joe Slovo Park and nearby Dunoon have been sites of ongoing protests action, allegedly over land, since the weekend. Passing trucks were torched and at least four people were arrested. - TimesLIVE