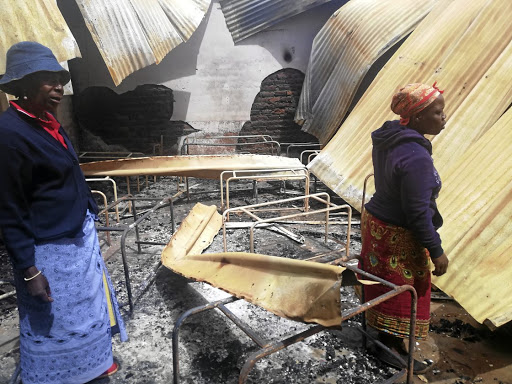 Residents walk through debris of burnt down Ratjeke Primary School in GaRatjeke village, near Giyani, in Limpopo./ PETER RAMOTHWALA

The absence of security guards in some of the schools has been blamed for over 70 burglaries in Limpopo since the start of the lockdown.

This is according to teachers union which says its members will have difficulties executing their duties in the absence of school equipment.

The South African Democratic Teachers Union (Sadtu) provincial secretary Sowell Tjebane said they have been calling for the department of education to place security guards in every school in the province.

"We really condemn this thuggish behaviour; our schools are targeted for theft of equipment such as computers, and for food and stationery. We now urge the department to consider our point and deploy security guards in all the schools," Tjebane said.

More than 400 schools have been broken into nationally since the start of the lockdown.

Angry residents in Orlando apprehended a pair of thugs who had attempted to break in and steal learning material at Ditawana Primary School on ...
News
1 year ago

Basic education minister Angie Motshekga's office last week said 397 schools had been vandalised or burgled, and Mpumalanga had emerged as the hardest-hit province.

Tjebane also called on communities to guard the schools against criminals.

Mbekwana High School in N'wamitwa outside Tzaneen was broken into and criminals stole a soccer team kit worth R6,000.

Chuene said the department has recorded 78 incidents of burglaries in schools since the beginning of the lockdown.

"All recorded incidents have been reported to the South African Police Service.

"The department welcomes the decision by the police to escalate the matter for reinforced intervention from safety and security agencies and increase patrol around schools," she added.

Police spokesman Brig Motlafela Mojapelo said at Mbekwana, police discovered that the perpetrators broke the doors' locks and chains to gain access to the storeroom.

Police said they were confident they were making progress in the school burglaries following the arrest of at least 13 suspects.

"The Mankweng cluster police arrested seven suspects for allegedly breaking into school premises and houses in Sekgosese and Sebayeng areas.

"Five suspects were previously arrested in Maake policing area and one in Northam. In total, 13 suspects have so far been arrested around the province on similar cases."

The ANC in the Vhembe region said it had learnt with shock that 15 schools have been broken into and some vandalised.

Party regional secretary Anderson Mudunungu said there was a high vandalism and burglary of school infrastructure in the Vhembe region.

"So far, 15 schools have been vandalised and items like groceries, computers and other equipment were stolen.

"All the ANC structures and other stakeholders are directed to work together with schools governing body, and other community structures to secure these public institutions," Mudunungu said.

The number of schools burgled, vandalised or set alight in Gauteng had increase to 40 by Thursday, the 14th day of the nationwide lockdown
News
1 year ago

Planned arson suspected as another school is burnt

A shocking number of schools in Gauteng have fallen victim to arson during the Covid-19-induced national lockdown, in what is suspected to be an ...
News
1 year ago

Another school has been burnt in Gauteng which brings the number of schools burnt during lockdown to four.
News
1 year ago
Next Article