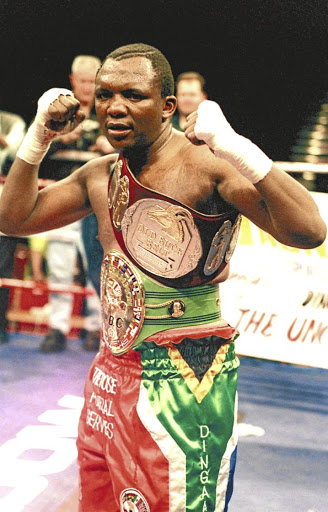 Dingaan Thobela was the first African boxer to win the coveted WBC belt in 2000. / Thembinkosi Dwayisa

In what could well be interpreted by many as singing undeserved praises to the WBC since he is a member of its board, Peter Ngatane has affirmed that the green and gold WBC belt is the most coveted of all the top-four most respected sanctioning bodies.

Other sanctioning bodies are the Panama-based WBA and the IBF, which is based in New York, United States.

The Boxing SA chairperson was answering a million-dollar question asked by many boxing people about the WBC belt, as to why it's the most sought-after around the globe.

Ngatane said the Mexico-based WBC was initially established by 11 countries, but now has more than 160-member countries. He further explained that all nine continents in the world are represented in that world boxing body, which was founded in 1963.

"That alone is the motivating factor for each and every boxer, as part of their success in their career, to want to win a WBC belt," he said.

Boxing SA will still host a memorial service in honour of departed referee, judge and KwaZulu-Natal provincial manager Francis Manning when the world ...
Sport
1 year ago

The board of Boxing SA, under Peter Ngatane, has flagged out key issues that apply specifically to the professional boxing sector during the 21 days ...
Sport
1 year ago

"It does not matter if they hold a belt from other sanctioning bodies. Also, besides it being a boxing organisation, the WBC is a social organisation..."

Ngatane added that they have what is termed "WBC Cares programme".

"It focuses in helping financially disadvantaged children in orphanages. Even during apartheid here, the WBC went to the United Nations to state its case against it," said Ngatane.

The larger WBC belt came into existence in 2000, and Dingaan "The Rose of Soweto" Thobela was the first boxer in Africa to win it when he dethroned Englishman Glen Catley as the super middleweight champion on September 1 2000.

SA-based Congolese Ilunga "Junior" Makabu is the last boxer from Africa to date to win a WBC belt. He won the cruiserweight title in a championship staged at home in Kinshasa on January 31.

Currently, there are eight South Africans whose names appear in the top 15 of the WBC rankings in different weight divisions, with Thabiso Mchunu at No 1 for Makabu's title.