'Syndicate behind the school fires': SA schools under siege with vandalised since lockdown 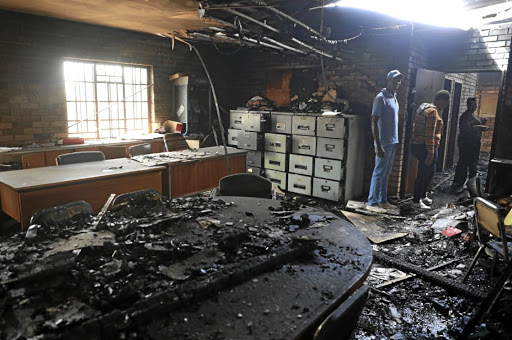 A syndicate is suspected to be behind recent attacks on public schools in Gauteng after more than 50 schools were either broken into or set alight in the last two weeks.

Nationally, 183 schools have either been vandalised or broken into since the lockdown which started last month.

At least 41 suspects were arrested in various areas across Gauteng for the 55 incidents in which schools were broken into or damaged in apparent arson attacks.

Provincial police spokesperson Captain Mavela Masondo didn't rule out the possibility of a syndicate being involved, saying it forms part of their investigation.

Four schools in Soshanguve, north of Pretoria, have been torched since the national lockdown began, apparently with no sign of theft.

The number of schools burgled, vandalised or set alight in Gauteng had increase to 40 by Thursday, the 14th day of the nationwide lockdown
News
1 year ago

Soshanguve High, Amogelang Secondary, Phuthanang Primary and Lethabong Secondary all suffered structural damages worth millions of rands due to acts of arson by unknown people.

During her visit last week, community safety MEC Faith Mazibuko told Sowetan that they suspected that community patrollers whose contracts had expired were behind the attacks.

"Most of the 41 suspects who have been arrested so far have appeared in court and charged with burglary and arson. Whether they are part of a syndicate or not will form part of our investigations," he said.

Masondo said 17 suspects were arrested in Johannesburg, nine in Tshwane, seven in Sedibeng, four each in Ekurhuleni and the West Rand.

Basic education spokesperson Elijah Mhlanga said apart from the damage to 55 schools in Gauteng, 72 schools were targeted in Mpumalanga, seven in North West seven and three in KwaZulu-Natal.

Minister of basic education Angie Motshekga said it was disheartening that criminal elements in communities could destroy the infrastructure of their own children.

"I am in constant touch with [police] minister [Bheki] Cele and with the assistance of the state intelligence forces we are following leads to the immediate arrest and prosecution of every single criminal responsible," Motshekga said.

KwaZulu-Natal education MEC Kwazi Mshengu said three laptops, a microwave oven, and 50 e-readers were stolen from the state of the art school in KwaMashu, north of Durban.

National Association of School Governing Bodies chairperson Matakanye Matakanya said: "We are worried about the future of the pupils from these schools. Even though there is a bit of criminality but we believe that mostly it is people who are fighting for tender security contracts."

This claim was also popular in Soshanguve after the fires.

Another school has been burnt in Gauteng which brings the number of schools burnt during lockdown to four.
News
1 year ago

21 Gauteng schools broken into or torched during lockdown so far: Lesufi

Eighteen schools in Gauteng had been burgled and vandalised by Tuesday, the 12th day of the nationwide lockdown.
News
1 year ago