Feud over route leads to killing of seven people 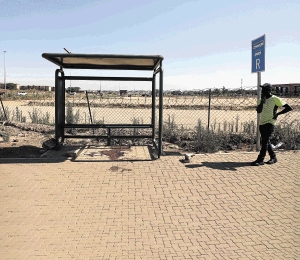 The killing of four taxi drivers on Monday night brings to seven the number of lives that have been lost as a result of a renewed feud over routes between Johannesburg and Pretoria.

Thousands of commuters were left stranded yesterday as the Celtis Ridge and Stone Ridge taxi ranks in Centurion were closed following the shootings.

At the heart of the taxi feud is said to be a conflict over the control of the Olievenhoutbosch taxi route and surrounding areas.

According to witnesses, a white Polo Vivo and a Mercedes-Benz arrived at the Celtis Ridge rank after 5pm. The occupants opened fire, killing one taxi driver.

They then sped off to the nearby Stone Ridge rank where three more drivers were shot dead.

The three drivers belonged to PRSTA, while the one who was shot earlier was with ZMTA. Nine passengers were wounded during the attacks.

When Sowetan visited the two taxi ranks yesterday, shattered glass and a pool of blood told of the horror that had occurred the night before.

A 37-year-old passenger, who seemed unaware of what had happened, was seen waiting at the Stoneridge rank, next to a pool of blood with an unbearable smell.

"I'm surprised that there are no taxis here today. I stay in Diepsloot and I have been waiting here for more than 20 minutes but there are no taxis. I didn't think much of this blood, I am truly surprised to discover that it is human blood," he said, before walking to the other side of the road.

"Two weeks back our rank marshal was killed and two drivers from Armsta were also killed. The issue is the conflict over Olievenhoutbosch route and surrounding areas," Mmola said.

"This has also affected our routes from Pretoria to Randburg. Armsta and PRSTA have been operating in these routes for five years but now they (Armsta) want a full control of these routes."

"Olievenhoutbosch falls under Johannesburg, but after the demarcation it now falls under Tshwane. The Pretoria associations want us to pack and go or share with them all our routes," Tsebe said.

"However, we have permits to operate in those routes. And we are not fighting for those routes but they are fighting us. On Monday, they attacked one of our patrol cars, killing our patroller. The MEC of public transport and roads infrastructure, Jacob Mamabolo, should organise an urgent meeting with all three associations so that we can bring our documents to show which association has the right to operate in these routes."

"We call on law enforcement agencies to work in tandem to abate the current spate of violence and ensure that the perpetrators are given long jail terms if not life imprisonment," Malele said.

Transport minister Fikile Mbalula called for a cessation of hostilities and an amicable resolution of all taxi-related disputes.

Police are investigating cases of murder and attempted murder.

The family of a female taxi owner who was gunned down in front of her 13-year-old daughter believes her killing may have been a hit.
News
2 years ago
Next Article