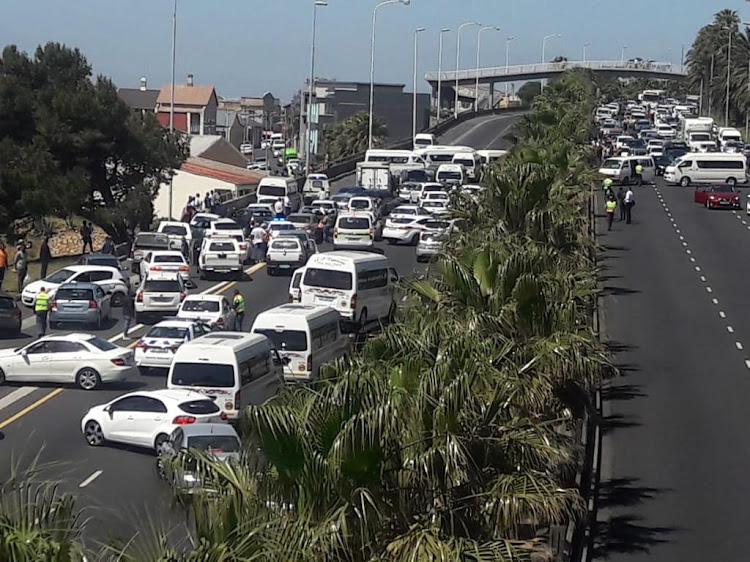 Cape Town authorities warned taxi drivers that they will not tolerate disruptions on the road.
Image: Supplied

Residents are wary that taxi strikes may disrupt their commute once again after last week saw taxi bosses take action against what they believe were unfair measures against them by the city of Cape Town.

The SA National Taxi Council (Santaco) met transport MEC Bonginkosi Madikizela on Monday and distanced itself from the strikes. Madikizela said the talks were productive, and he met city officials to discuss a plan to quell frustration by the taxi association.

"My commitment is to find amicable solutions within the ambit of the law, ensure that people are transported to work safely, and improve efficiency in the minibus-taxi industry, which contributes massively to our economy," he said.

He said that the city had agreed to consider releasing vehicles impounded last Friday if Santaco provided a list of drivers who blockaded roads without the owners' knowledge, as well as finding a mechanism to regulate taxi drivers under a full-time employment contract.

"We have been raising this issue for some time but taxi drivers and some taxi owners are not keen on regularising their drivers' relationship with the owners," he said. "This matter will be discussed at the planned workshop taking place next month."

Taxi drivers blocked roads in and out of the city last week as they protested against sanctions by the city to impound unlicensed vehicles.

Protest in the Dunoon area last month led to widespread violence where cars were stoned and bus terminals were set alight.

But the city has stood its ground against the strike, and impounded a further 132 taxis since the start of last week.

"The continued disregard for the law in the public transport sector is of grave concern, and so too the attempted resistance to our enforcement operations," said mayoral committee member for safety and security JP Smith.

A 20-year-old grade 11 pupil assaulted outside the school yard by three women for allegedly “wrecking a marriage” wants justice.
News
2 years ago

"However, this sector isn't the only problem. There are many private road users who also need to reconsider their actions. Whether it is drunk driving or speeding or reckless and negligent driving, the city will not tolerate this type of behaviour from anyone. Many motorists complain about the taxis, but fail to take accountability for their own actions," he said.

Warnings circulated on social media on Monday that the strike would resume on Tuesday, and the city said it was on "high alert".

"The city cannot confirm the notice in circulation warning of another taxi blockade/strike as experienced last Friday. Our staff are, however, on high alert and will act in support of the police to minimise any potential disruptions that may result from any unlawful behaviour," said Smith.

"As we have said before, we cannot be held to ransom by elements within the taxi industry who insist on breaking the law and don't take accountability for their actions."